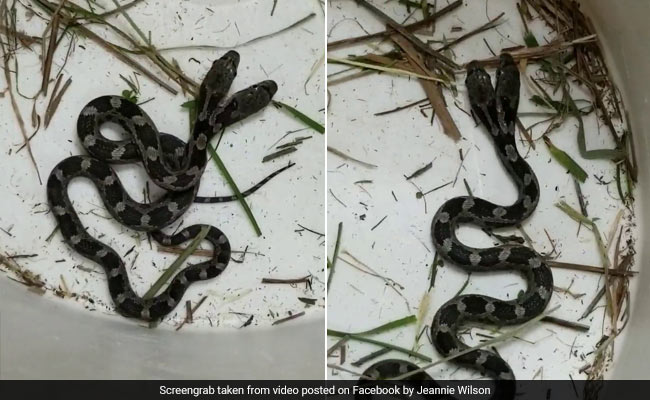 Jeannie Wilson found a two-headed rat snake inside her house.

A woman from the US state of North Carolina was surprised to find a rare two-headed snake inside her house. Jeannie Wilson said she was in the sunroom of her Alexander County home when she saw the baby snake slithering around.

Ms Wilson said she was left shocked by the snake’s appearance. She estimated it to be about a foot long and immediately called her family on spotting it near a table.

She told Newsweek that she did not want to kill the snake, so they caught it and put it inside a jar. “I saw its heads first and couldn’t believe it. I didn’t want to kill it so we put it in a jar,” she said. The Alexander County resident later shared a video of the snake on Facebook, revealing that she had nicknamed it “Double Trouble”.

“OK Facebook… anybody out there know of a place that would take Double Trouble and care for him/her or should I turn it loose? It’s not poisonous,” she wrote on Monday, sharing footage of the two-headed snake.

The reptile was later handed over to the Catawba Science Center, where it was identified to be a baby black rat snake. “They told me it was around four months old and was a rat snake and was fixing to shed… I guess that’s why it wasn’t eating,” Ms Wilson told Newsweek .

The science center said that the snake’s two heads are rare, occurring in one out of every 100,000 snakes. It plans to keep the reptile and use it in its programs for schoolchildren.