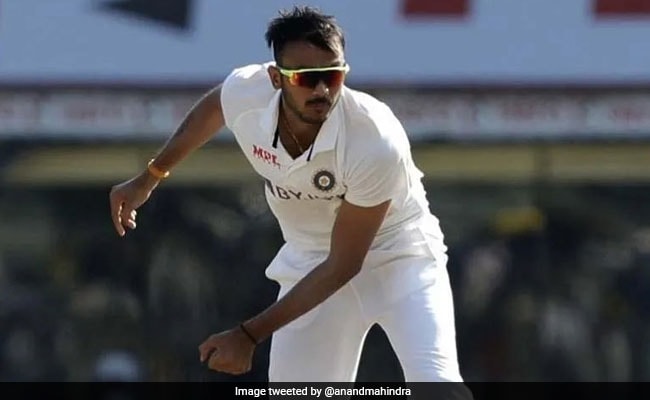 Anand Mahindra has a good reason for wearing sunglasses indoors, even though his wife thinks he is “crazy” for doing so. The Chairman of Mahindra Group took to Twitter to reveal the reason behind his decision to wear shades while watching the second T20 international match between India and England at home on Sunday. The 65-year-old businessman shared a picture of a pair of shades similar to the ones worn by Axar Patel during an earlier Test match between India and England and wrote: “I said I was going to get myself a pair of ‘Axar’s shades’ to commemorate the series win.”

Alongside the picture of his new shades, Mr Mahindra posted a screenshot of a tweet from March 6, in which he had applauded the Indian cricket team for their impressive win over England in the fourth Test at Ahmedabad.

In his tweet, he had shared a picture of Axar Patel — whose standout performance helped win the match — sporting the white-framed sunglasses. “I need to get these sunglasses to commemorate the victory,” Mr Mahindra had written, asking if someone could tell him where he could get the sunglasses from.

Yesterday, Mr Mahindra revealed that he did, in fact, manage to get his hands on the “Axar shades”, thanks to Sporting Tool Relish. He also said he planned to wear the shades while watching the second T20 match as they could work as a good luck charm.

I said I was going to get myself a pair of ‘Axar’s shades’ to commemorate the series win. Bought a pair (thanks Sporting Tool Relish!) & all set to watch the match tonight. I know, I know; no shades needed to watch TV & wife thinks I’m crazy but maybe it’ll be a good luck charm! pic.twitter.com/SKkE9z3D4N

His tweet has racked up nearly 7,000 ‘likes’ on the microblogging platform. Many Twitter users agreed that the shades could be a good luck charm, given that India won the match on Sunday.

Some requested that Mr Mahindra post a picture wearing the shades, which he promised to do if India wins the series.

Sirji, I meant agar hum SERIES jeetenge! Let these shades prove they’re not just a ‘one-match wonder’ & will be lucky for the whole series…???? https://t.co/DN0PSF6vBO

“Axar wasn’t in squad today but your good luck worked!” wrote one person in the comments section.

“Can’t believe such a humorous person live inside a great businessman and philanthropist. Enjoying your tweets in all shades of humanity,” another said.

Virat Kohli slammed the winning six to seal a win for India against England in the second T20I of the five-match series.