Why 29 Tonnes Of Carrots Were Dumped On A London Street 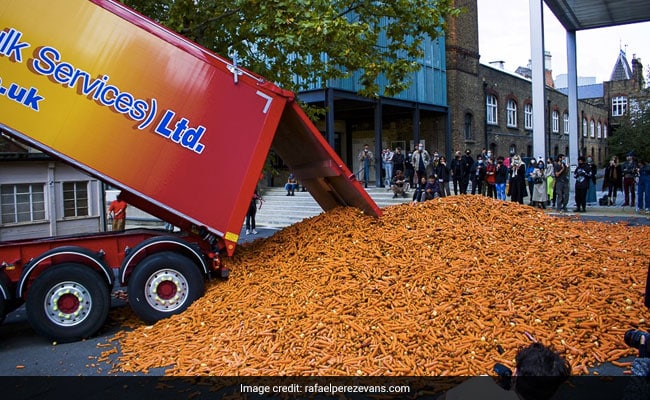 Twenty-nine tonnes of carrots were dumped outside Goldsmiths College.

Twenty-nine tonnes of carrots were dumped on a street in London, leaving onlookers mystified. Londoners took to social media on Wednesday to share photos and videos of the 29,000 kilograms of carrots that were dumped outside Goldsmiths College in south London. A lorry was recorded offloading the produce onto a street on the university campus as a crowd of students watched.

“Does anyone know why a significant volume of carrots has just been dumped on Goldsmiths university campus?” one bemused Twitter user asked.

Does anyone know why a significant volume of carrots has just been dumped on Goldsmiths university campus? pic.twitter.com/oYj51IxHfp

Another shared a video of the bright orange veggies lying in a pile on the road.

The mystery was revealed when Goldsmiths responded to one of the viral tweets and explained that the carrots were part of an art installation by a student.

“It is an installation called ‘Grounding’ by the artist and MFA student Rafael Perez Evans,” the college wrote on the microblogging platform, adding that the installation is part of Goldsmiths’ MFA degree show.

A statement from the artist Rafael Perez Evans further revealed that “produce in the piece are unwanted carrots, carrots that the food industry in the UK deems not worthy of shelves.” The carrots will be removed after the exhibition and donated to farm animals.

The artwork explores “the tensions in visibility between the rural and the city” and was inspired by European farmers dumping their devalued produce as a form of protest.

While Mr Evans has arranged for the carrots to be collected and sent to feed animals, Sky News reports that since its installation on Tuesday, many students were filmed climbing on the artwork and taking carrots home to eat.

The artwork garnered mixed responses on social media, with some criticising it for contributing to – rather than highlighting – the problem of food wastage.

“If they had not been dumped on the ground, those carrots could have been donated to organizations that feed PEOPLE,” one Twitter user wrote.

“Whether you agree on its validity as an ‘instillation’ or even a piece of art, no one can disagree that it’s a visual image that you’ll remember,” another remarked.

Elon Musk Responds To Critical Tweet With A Single Emoji: The Eggplant

Man Fakes His Own Kidnapping To Get Out Of Work

Watch: How To Make High-Protein Moong Dal Uttapam For Breakfast – Recipe Video Inside