“Who Asked You To Be General Dyer?” Tejashwi Yadav Condemns Munger Firing 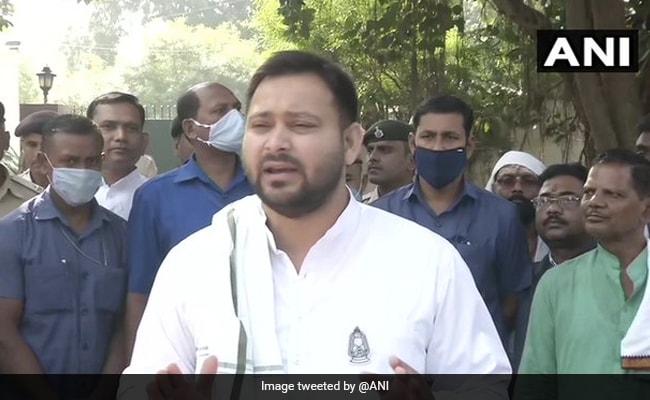 Rashtriya Janata Dal’s Tejshwi Yadav has attacked Bihar’s incumbent Chief Minister Nitish Kumar over the alleged clashes between the police and some “anti-social” elements in Bihar’s Munger on Monday.

An 18-year-old man was shot dead and some people were injured in firing after clashes during the immersion of Goddess Durga.

“What was Bihar’s Chief Minister doing? What was deputy chief minister Sushil Modi, who is a leader of the BJP, doing? They have a double-engine government. Did they not have information? This (inaction) shows the role they played in the incident,” Mr Yadav, Grand Alliance’s chief ministerial face, said as polling started on 71 seats in Bihar.

He has compared the brutality of Monday’s police lathicharge on a truck of devotees headed for immersion on Durga Puja with that of General Dyer’s during the Jallianwala Bagh massacre in 1919 on the festival of Baisakhi.

“Who gave you (the police) the order to become General Dyer? We want to know what has Sushil Modi ji done other than tweet. We want the BJP leader to tell us who gave the permission… This is a serious matter,” Mr Yadav asked.

We know the lady officer in the police team that lathicharged devotees is the daughter of a JD(U) leader, Mr Yadav said without naming Superintendent of Police Lipi Singh and sought her transfer.

He has also sought “immediate transfer” of the District Magistrate as well, strict action against the accused, and that the probe should be overseen by a High Court committee.

Often attacked with the “jungle raj” jibe – referring to his parents’ term as chief ministers in the state – Mr Yadav targeted the incumbent government on the law and order situation in Bihar.