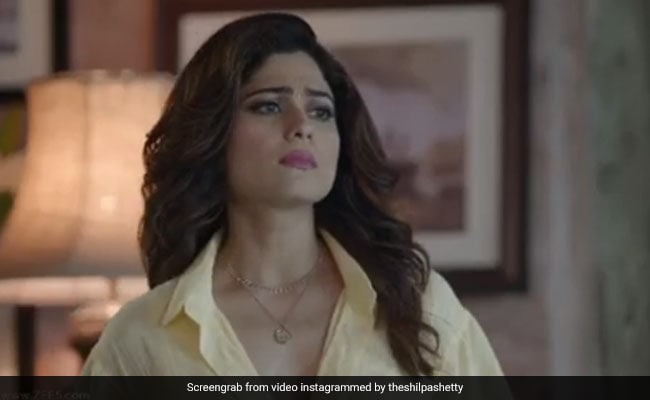 Shamita Shetty in a still from Black Widows (courtesy shamitashetty_official)

“Can’t wait to see this one,” Shilpa Shetty wrote for sister Shamita Shetty‘s upcoming web series Black Widows. Shamita Shetty co-stars with Mona Singh and Swastika Mukherjee in the Zee 5 crime thriller, which tracks the story of three best friends. “All the best to whole team of Black Widows,” wrote Shilpa while sharing the teaser of the web show. The Black Widows teaser was shared by Shamita Shetty on her Instagram on Thursday. “Never underestimate the power of a Queen,” she wrote. The Zee 5 web series also stars actors such as Raima Sen, Sharad Kelkar, Parambrata Chattopadhyay, Sabyasachi Chakraborty and Aamir Ali in pivotal roles.

Here’s how Shilpa Shetty gave a shout out to Shamita for her new venture:

The storyline of Black Widows is an interesting one – three best friends, troubled by their respective husbands, plan their deaths and make them look like an accident. However, things don’t go as planned as of the husbands survive and seek revenge. Black Widows is directed by Birsa Dasgupta, who worked with Anurag Kashyap in 2004 film Black Friday.

Shamita Shetty is best known for her role in her Bollywood debut Mohabbatein. She has also starred in films such as Mere Yaar Ki Shaadi Hai, Cash, Bewafaa and Zeher. Shamita took a break of sorts from films after 2007’s Cash and shifted focus to reality TV shows. She participated in Bigg Boss 3 and was the second runner in Jhalak Dikhhla Jaa 8. Shamita Shetty also turned out to be a finalist on Fear Factor: Khatron Ke Khiladi 9.