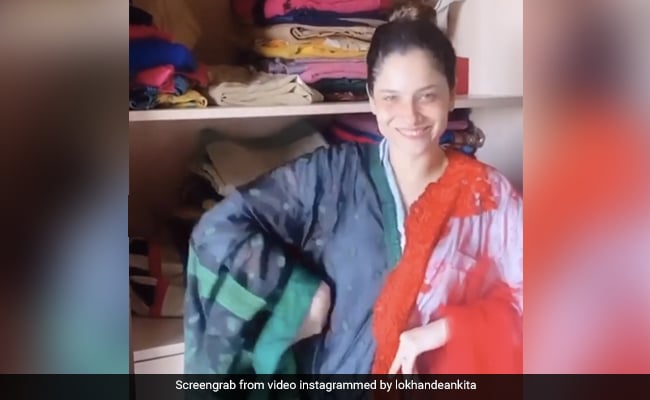 Ankita Lokhande in a still from video she shared (courtesy lokhandeankita)

Ankita Lokhande had a rather nostalgic Thursday as she stumbled upon some wardrobe pieces dipped in Pavitra Rishta memories. On her Instagram, Ankita revealed she found some of her old sarees which her character Archana wore in the popular TV show Pavitra Rishta. “I have found a few of my old Pavitra Rishta sarees and I’m so excited to see them,” Ankita said in an Instagram story. An ecstatic Ankita had to share her pitara of memories on Instagram, so she curated a post with glimpses of her old sarees and wrote: “I have always been fond of sarees, always! With Archana, I started experimenting my looks, designs, different patterns and different styles of sarees.”

“I clearly remember when I used to buy sarees from Calcutta for Pavitra Rishta on my own. I used to sit with the stylist and always tried to create something beautiful for all the Pavitra Rishta fans. Very nostalgic today after seeing these sarees after so long. So, thought of sharing,” Ankita added. Ekta Kapoor, whose Balaji Telefilms created Pavitra Rishta, left this comment: “Fab.”

Ankita Lokhande’s love for sarees is very much evident in these posts on her Instagram – she rocked every look:

Ankita Lokhande is best known for portraying Archana in Pavitra Rishta. She has also featured in shows such as Ek Thhi Naayka, Shakti – Astitva Ke Ehsaas Ki, among others. Ankita stepped into Bollywood with Kangana Ranaut’s 2019 period-drama Manikarnika: The Queen of Jhansi and was last seen in Baaghi 3.