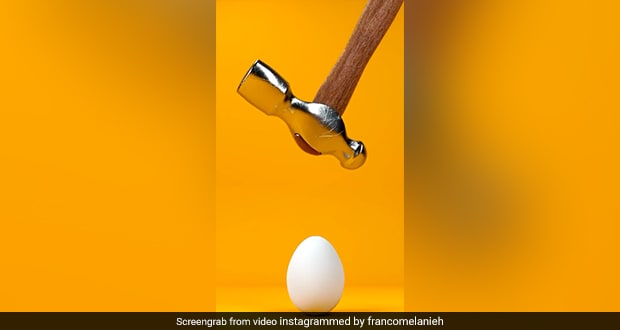 Viral Video shows an egg coming in contact with a hammer. See what happens next!

The internet is a treasure trove of satisfying videos. These include food videos as well that showcase the near-hypnotic behind-the-scenes action of some of our favourite dishes. These mesmerising food videos have plenty of takers online – whether it’s a cookie being adorned with sugar icing, or an ice cube melting in a cup of hot coffee. A recently-surfaced satisfying food video shows an egg being destroyed by a hammer, and what happens next will surely take you by surprise. Here’s the video:

(Also Read: Here’s The Easiest Way To Poach Eggs. All You Need Is 10 Minutes And An Oven!)

The video showed a hammer slowly dropping towards a perfect-looking egg. However, when the two came in contact, it was the hammer which exploded into pieces upon impact. How strange, right?

The video was shared on Instagram by @satisfyingxtimes, and it received 67k likes on the social media application. It was actually the brainchild of Germany-based animator, Franco Melanieh, who created the illusory video of an egg with the help of animation through a digital software.

The stunning video looked too real to users, who were quite taken aback with the visuals of it. Netizens were divided about the video – some found it weirdly satisfying while others did not take a liking to it. A user commented, “This Egg is Nokia,” while another responded, “That’s one hard-boiled egg.”

What did you think of the interesting video? Tell us in the comments below!