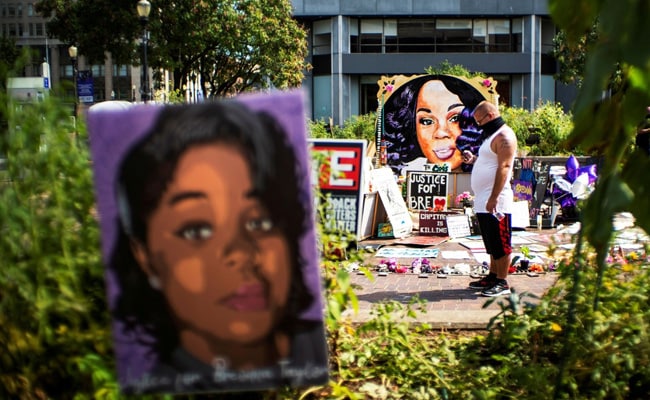 Police serving a search warrant on Breonna Taylor’s home told investigators they banged on her door and announced themselves from 30 to 90 seconds before breaking in during a raid that ended with the officers fatally shooting her, audio recordings released on Friday show.

The newly revealed details from the police officers contrast with earlier witness reports, and their account has been a point of contention in the case that has captured national attention and prompted street protests over racism and police use of force.

Kentucky’s attorney general on Friday released audio recordings of the grand jury proceedings that cleared three policemen of homicide charges in Taylor’s death, offering a rare peek at the inner workings of a grand jury, which is normally kept secret.

The grand jury last week cleared the two white officers who shot Taylor and charged a third with wanton endangerment for stray bullets that hit a neighboring apartment in the March 13 raid.

Street protesters have called for the arrest of the officers and demanded justice for Taylor, a 26-year-old Black emergency medical technician whose family won a $12 million wrongful death settlement from the city of Louisville.

Taylor’s boyfriend, Kenneth Walker, who was with her, has said he believed the plainclothes officers who burst in might have been Taylor’s ex-boyfriend. He fired once, wounding one officer. Police then fired 32 rounds, six of which hit Taylor.

Hours later and with his voice breaking with emotion, the recordings showed, Walker told police he and Taylor were “scared to death” at the banging at the door, with Taylor yelling “Who is it?” at the top of her lungs but hearing no response.

The recordings made over three days of proceedings show police were confused by the burst of their own gunfire. One officer said he did not realize he had fired his weapon until after the fact, while another who opened fire mistakenly feared his colleagues were being shot by an AR-15.

The recordings also demonstrate grand jurors were engaged with the investigators presenting the case, peppering them with questions about why police did not wear body cameras, and whether police in the raid were aware that other officers had already located the central suspect in the investigation, Taylor’s ex-boyfriend.

Strikingly absent were any recordings of prosecutor recommendations that might have revealed how prosecutors guided the 12-member panel’s thinking.

“Juror deliberations and prosecutor recommendations and statements were not recorded, as they are not evidence,” Kentucky Attorney General Daniel Cameron, the special prosecutor in the case, said in a statement.

In a police interview on March 25 that was played to the grand jury last week, the officer who was wounded, Sergeant Jonathan Mattingly, said police banged on Taylor’s door six or seven different times, repeatedly announcing they were police there to serve a search warrant.

“It probably lasted between 45 seconds and a minute, banging on the door,” Mattingly said, before police broke in.

Detective Myles Cosgrove, in his interview with police investigators, said the officers knocked on the door for about 90 seconds.

Multiple witnesses told reporters they did not hear any police announcement, and Cameron acknowledged that the single witness who verified the police account of their announcement changed his story.

The witness first told investigators in March he did not hear police identify themselves but two months later, in a follow-up interview, the witness said he heard officers knock and announce, according to an investigator who testified before the grand jury.

Cosgrove, who fired 16 shots, described the experience as disorienting, with bright muzzle flashes interrupting the darkness, as he learned that Mattingly had been shot.

He said he only realized after the fact that he had started firing his gun. “It’s like a surreal thing,” Cosgrove said.

When the shooting started, Hankison said he fired into the apartment from outside, and saw more flashes light up the room, mistakenly thinking either Walker or Taylor was holding an AR-15 or other long gun.

“I thought they were just being executed,” Hankison, who shot 10 times, said of his colleagues.

Walker’s single round came from a 9 mm handgun that he was licensed to carry. Taylor was unarmed.

Attorneys for Taylor’s family and Walker did not immediately respond to requests for comment.

After the gunfire, Walker said he dropped to the ground in fear when he saw Taylor had been shot.

“She’s right there on the ground like bleeding,” he said, before breaking down with emotion.