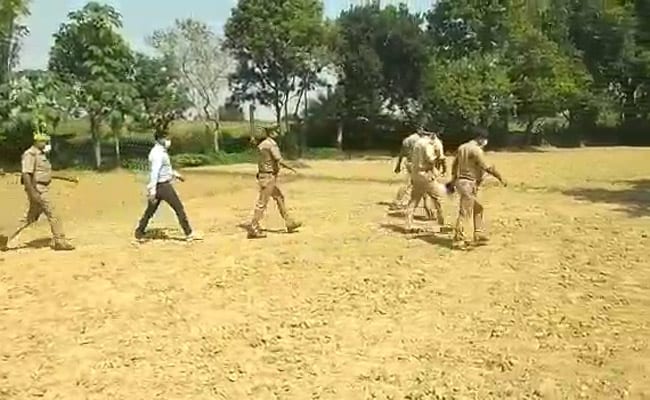 The body of a girl who went missing on September 26 at a village in Uttar Pradesh’s Kanpur Dehat district has been found reportedly mutilated in a field. Two men – both relatives of the girl’s family – have been arrested, the police said.

The crime has been reported amid outrage over the gang rape and murder of a 20-year-old woman in UP’s Hathras, who was cremated by police hastily, away from her family members.

The parents of the minor whose body was found have alleged she was raped before she was murdered.

The police said they have sent the body parts for an autopsy, adding they are investigating the crime. The girl was from the Scheduled Castes community, so are the accused.

“The girl’s father said they had a land dispute and two men who threatened them have killed her minor daughter. We have arrested the two and are questioning them,” said Kanpur Dehat Superintendent of Police KK Chaudhari.

In visuals, a large group of policemen are seen walking in a file towards a thicket on the edge of a barren field. There, they find body parts of the girl strewn around. The family members of the girl are seen breaking down on seeing the horrific visuals.

Furious protests against the police and the government have been staged across the country, including one in national capital Delhi on Friday, where Chief Minister Arvind Kejriwal made an appearance and demanded that the four accused be executed.

The ruling BJP, which is under pressure over its apparent inability to prevent horrific crimes against women – at least two more assaults and rapes have been reported from the state since the Hathras case – had earlier dismissed protests by the opposition as a “political stunt”.