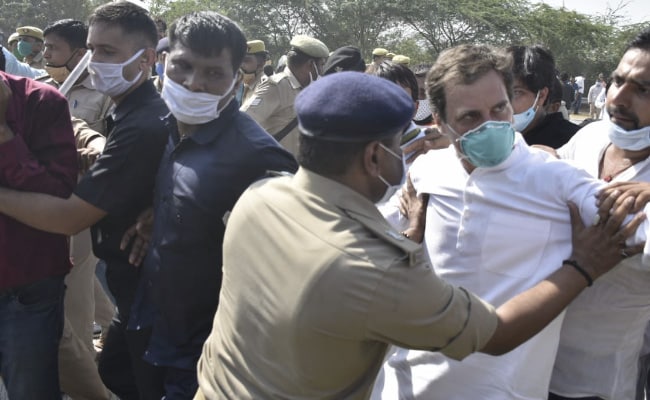 Rahul Gandhi and Priyanka Gandhi were detained on Thursday. (File)

Congress MP Rahul Gandhi will make another attempt this afternoon to travel to Hathras in Uttar Pradesh and speak to the family of the 20-year-old Dalit woman who was gang raped and murdered, and whose body was then cremated by the police in a secretive ceremony at 2.30 am.

A delegation of party leaders that will include Mr Gandhi and Priyanka Gandhi Vadra will, if they are allowed to, speak to the family of the young woman, who have been traumatised first by the savage assault and then by the alleged inaction of the UP Police and government.

This will be Mr Gandhi’s second attempt to meet her family.

On Thursday both he and Mrs Gandhi Vadra were stopped in UP’s Greater Noida (near Delhi) and briefly taken into custody. Mr Gandhi was manhandled and pushed to the ground by the cops in that tussle, prompting indignation at the UP government’s handling of opposition leaders.

“Why are you arresting me? What are the grounds for the arrest? What law am I violating,” Mr Gandhi could be heard saying in dramatic videos of the confrontation with the cops, who said they were charging him with “Section 188” – a law on defying official orders.

The following day another delegation – this time led by the Trinamool Congress’s Derek O’Brien – was similarly stopped, and Mr O’Brien and women MPs pushed to the ground as well.

The ruling BJP, which is under pressure over its handling of the Hathras tragedy and its apparent inability to prevent such horrific crimes against women – at least two more assaults and rapes have been reported from the state since then – has dismissed these protests as a “political stunt”.

Chief Minister Yogi Adityanath, whose resignation has been demanded by activists and the opposition, made a grand declaration of his government’s commitment to women’s safety on Friday. “Those who even think of harming mothers and daughters in UP, their destruction is assured,” he tweeted in Hindi.