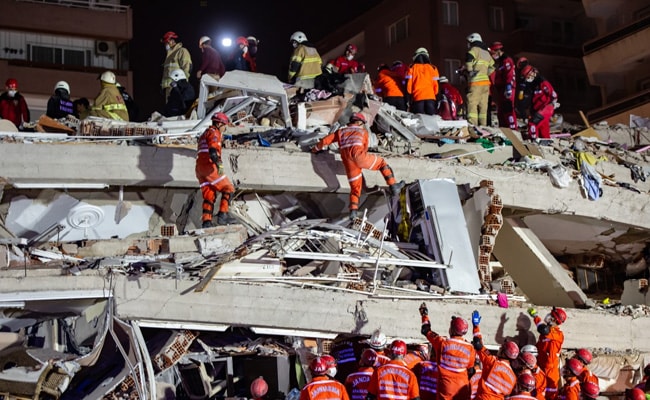 Volunteers search for survivors at a collapsed building after a powerful earthquake struck Turkey.

At least 22 people were killed and several injured on Friday when a powerful earthquake struck the Turkey’s western coast and parts of Greece.

The scale of the destruction captured on camera showed entire building blocks being reduced to rubble, water gushing through the streets in coastal towns after a Tsunami alert, and people running out of buildings in sheer panic.

Much of the damage occurred in and around Turkey’s Aegean resort city of Izmir, which has three million residents and is filled with high-rise apartment blocks.

In one such video that went viral on social media, CCTV footage from inside a restaurant’s kitchen showed staff members cowering under tables in fear as the earthquake measuring 7.0 magnittude violently shook the building.

In another video that also went viral, water from an apparent sea surge flooded the streets of one of the towns near Izmir. And aerial footage showed large piles of debris where building once stood.

Thick white plumes of smoke towered over various parts of the city where large buildings had collapsed. Rescuers, helped by residents and sniffer dogs, used chainsaws to try and force their way through the rubble of one destroyed seven-floor building.

Yet another tragedy during these difficult times. Compassion, humanity and hope, must drive us forward at this time.

Some of the world’s strongest earthquakes have been registered along a fault line that runs across Turkey to Greece.

In Greece, the last deadly quake killed two people on the island of Kos, near Samos, in July 2017.