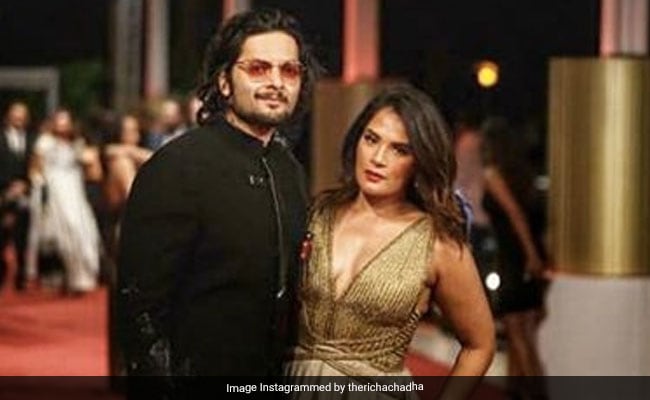 Ali Fazal and Richa Chadha, who are currently in Egypt for the El Gouna Film Festival, made every red carpet appearance count and how. The stars have actively been sharing pictures from the film festival which they attended together. In one of the posts, Richa Chadha revealed that all the necessary safety precautions were taken during the film festival. “To those asking, the red carpet was preceded by a Covid test for all attendees… especially in outstation ones. We are playing super safe…only with the negatives,” Richa Chadha clearly stated in one of her posts on Instagram.

For the red carpet closing ceremony, Richa Chadha opted for dual toned ruffled gown from the shelves of Shantanu and Nikhil and she looked stunning as ever. She added a pop of colour with bright red lipstick. Take a look at her OOTD here:

Ali Fazal also picked a Shantanu and Nikhil outfit. He wore a black sherwani with matching Christian Louboutin footwear. He wrote in his caption: “Gracing the red carpet for the closing ceremony at the El Gouna Film Festival – the very special jury along with Richa on the red carpet. A grand closing indeed.”

Earlier, Richa Chadha and Ali Fazal made heads turn at the red carpet in their formal outfits. Ali Fazal opted for a classic black, while Richa Chadha picked a chic pink pantsuit. “For the lovely open air Chaplin concert, chose this pant suit, or as we say Rani Pink,” she captioned the post.

Richa Chadha and Ali Fazal are both veterans when it comes to international film festivals. Richa’s films Gangs Of Wasseypur and Masaan were screened at Cannes Film Festival. Her film Words With Gods premiered at the Venice Film Festival, while Love Sonia had a screening at the London Indian Film Festival.