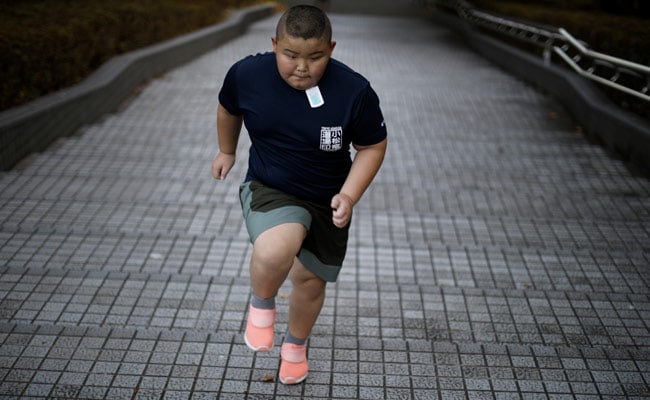 Among the young sumo wrestlers lifting weights in the ring, 10-year-old Kyuta Kumagai stands out.

At 85 kilograms (187 lb), Kyuta is twice the size of the other children his age and is so dominant that he wrestles, and beats, boys five or six years older.

Last year, he was crowned the under-10 world champion, beating out competition from as far afield as the United Kingdom and Ukraine.

His training regime, devised by his father Taisuke, is relentless.

He trains six days a week, either at his local sumo club or lifting weights. He also swims and practices track and field to build up the flexibility and explosive quickness needed for sumo wrestling.

Kyuta has been on the programme since his father entered him in a tournament while still in kindergarten.

“I didn’t teach him anything, he could do various things naturally,” said Taisuke, a former amateur sumo.

“There is a talent for sumo and he has that talent. He won the tournament. I thought he may have something special.”

A shy boy of few words, Kyuta’s motivations are simple.

“It is fun to beat people older than me.”

“I’M BETTING EVERYTHING ON THIS”

When it became apparent the boy had talent, Taisuke moved the family to the Fukugawa area of Tokyo that is famous for producing sumo wrestlers. It has an abundance of clubs and Nominosukune Shrine, where the God of Sumo is said to reside, meaning there is a lot of local support for the Kumagais.

Father and son use a local temple for intense one-on-one training. The sessions tend to finish with the pair wrestling up and down the carpet in front of the main shrine.

Taisuke pushes Kyuta so hard that the child is often left breathless and crying. But he believes it is the only way to get the best out of his son.

“I think he is managing to make time for himself and I think he has time to play with his friends,” explained Taisuke. “I don’t think it is too much pressure.”

The training is expensive and requires a huge commitment from the entire family, including his mother Makiko.

“I don’t do gambling (at a casino). Instead, I’m betting everything on this,” Taisuke said.

Key to any sumo’s success is their diet.

On an average day, Kyuta will consume 2,700 to 4,000 calories, including over a litre of milk and copious amounts of protein. Steak is his favourite.

Over a bowl of chanko nabe, a speciality sumo broth, Taisuke said Kyuta needs to put on another 20 kg by the time he enters middle school in two years.

If he does that, the hope is he will be taken in by a high-profile sumo stable and Taisuke said there has already been interest.

“At the moment, he has great talent,” said Taira.

Kyuta wants to reach the level of ‘yokozuna’ – the highest ranking in the sport.

But he admits the regime can be brutal.

“Sumo training is something you don’t describe with words like ‘enjoy’,” Kyuta said.

“When it became tough… I have thought about (quitting) sometimes.”

For now though, the grind towards the top continues, for both father and son.