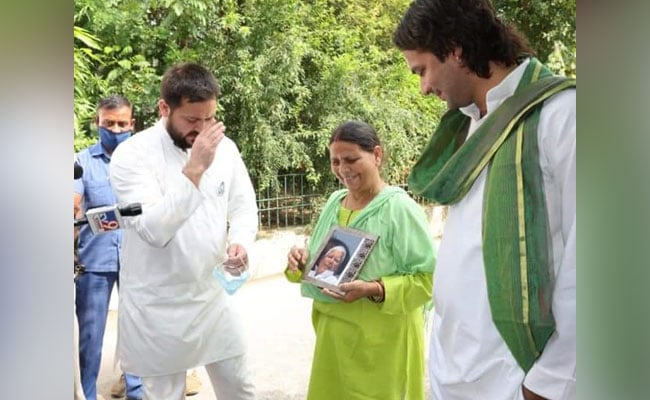 Tejashwi Yadav, Bihar’s Leader of the opposition and its Chief Ministerial candidate, has challenged four-time Chief Minister Nitish Kumar from his home turf Nalanda. “Let him select any one constituency from home district Nalanda and I will contest against him,” the 30-year-old said today while filing his nomination from Raghopur assembly seat.

Bihar, he said, is “heading for a change”, indicating that the people will pay back Mr Kumar for his abrupt change of team halfway through the term.

The Rashtriya Janata Dal — which Mr Yadav is heading while his father Lalu Yadav is in jail — won the lion’s share of 80 of the state’s 243 seats in the 2015 election as a part of the Grand Alliance with the Congress and Nitish Kumar’s Janata Dal United. Mr Kumar’s party won 71 seats and the Congress, 27 seats.

But two years on, in July 2017, Nitish Kumar severed ties with the two parties and joined hands with the BJP, reviving the old alliance that he broke in 2013 over Narendra Modi’s being projected as the Prime Ministerial candidate of the NDA.

Mr Kumar, who had refrained from attacking the son of his frenemy, made a beginning earlier this week while launching his election campaign.

Both Tejashwi Yadav and the Chief Ministerial candidate of the Third Front — Upendra Kushwaha — were lightweights, indicated Mr Kumar, saying “Kisi mein koi dam nahi hain (Neither has any potential)”.

The Chief Minister also took on Tejashwi Yadav over his promise of providing 10 lakh jobs in his first cabinet meeting.  “You (the voters) should find out how many cabinet meetings used to take place during his parents’ 15-year-rule,” he had said in a jibe at Lalu Yadav and his wife Rabri Devi.

“Let’s debate my 20 months in his cabinet,” Tejashwi Yadav retorted today, pointing to his role as Mr Kumar’s deputy in the Grand Alliance government. At the time, he had handled the lucrative Road Construction Department.

Lalu Yadav and his son had been unsparing in their criticism of the Chief Minster, saying he was making an issue out of BJP allegations to justify his exit from the alliance.