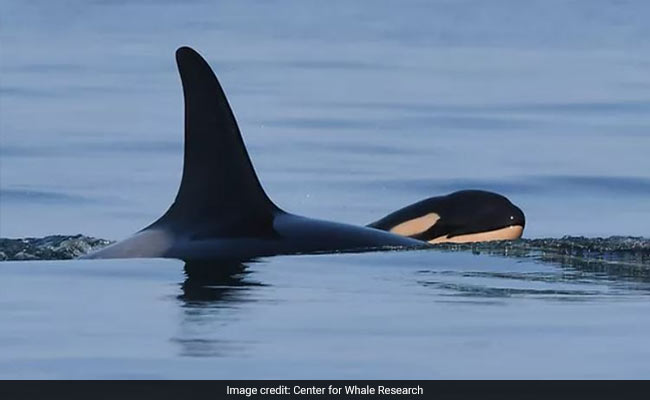 Tahlequah photographed with her “spunky and energetic” baby boy.

Tahlequah, the killer whale that carried her dead calf in the water for more than two weeks in 2018, is now mother to a “feisty” baby boy. Tahlequah, also known as J35 to scientists, gave birth to her calf earlier this month. Now, photos taken by naturalist and photographer Sara Hysong-Shimazu on September 22 confirm that the new calf is a boy.

The killer whale had raised worldwide concern with her unprecedented mourning period two years ago. The orca swam for more than two weeks with her dead newborn, refusing to let it sink. News of her pregnancy and the subsequent birth of Tahlequah’s calf on September 4 had delighted researchers and wildlife enthusiasts across the world.

The Center for Whale Research in the state of Washington had said said at the time that the calf appeared “healthy and precocious”. It had not revealed the gender of the newborn.

Now, the Center has confirmed the calf is a healthy male. “Updating our recent announcement concerning J35’s new calf, J57: we can confirm that it is male,” the Center for Whale Research said in a statement. “This feisty young boy was seen last evening, September 22, near Point Roberts, Washington. He was photographed rolling, spyhopping, and swimming alongside his mother, who was actively foraging for food.”

Update: J57 is a boy. This feisty calf was seen last evening near Pt. Roberts, WA. He was photographed rolling, spyhopping, and swimming alongside J35, who was actively foraging for food. Photo by Sara Hysong-Shimazu/Maya’s Legacy and the PWWA.https://t.co/wU9ZOnFtPbpic.twitter.com/lcgHB8Whhj

Photographer Sara Hysong-Shimazu, whose photos of J57 helped with the identification, said that she spotted the calf with his mother and several other whales of the pod. She took photographs of the killer whales and provided them to the Center for Whale Research, which confirmed J57’s gender.

“Tahlequah rolled her calf J57 up on her back, exposing his belly,” she said, according to a news release by the Pacific Whale Watch Association.

“It was really touching to see how active and social they were together and to see J57 surfacing with both his mom and surrounded by others in the community. He certainly seemed spunky and energetic!”

Tahlequah is part of a community of three pods, which is made up of around 72 whales. They are frequently sighted near Vancouver Island in Canada and in inland marine waters of Washington state in the US.

In 2018, Tahlequah was spotted carrying her dead calf for 17 days. Her ‘tour of grief’ made headlines at the time.