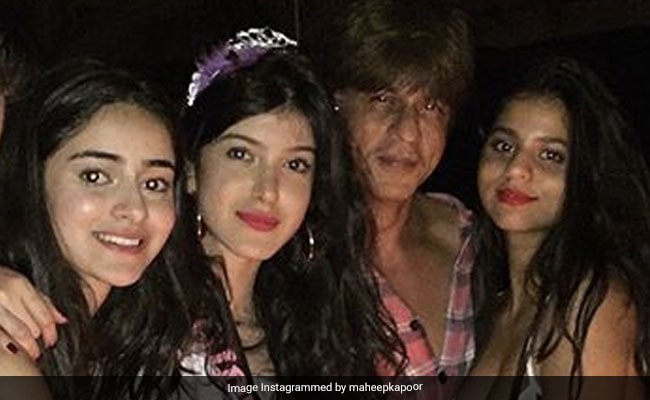 We knew of Suhana Khan’s two best friends Shanaya Kapoor and Ananya Panday but looks like there’s another – dad Shah Rukh Khan. Right after the clock struck midnight on Shah Rukh’s birthday, Suhana dedicated an adorable birthday wish to her father. It so happens that Shanaya Kapoor shares her birthday wish Shah Rukh and Suhana posted a two-in-one birthday wish on her Instagram story. Sharing a throwback photo from Shah Rukh and Shanaya’s birthday celebrations last year, Suhana wrote: “Love… Happy birthday to my best friends.” Shanaya is 21 as of today while Shah Rukh celebrates his 55th birthday today. 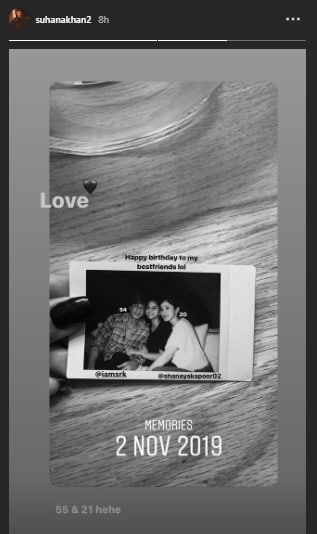 Suhana, Shanaya and Ananya are Bollywood’s gen-next best friend trio. Ananya celebrated her 22nd birthday on Friday, when Suhana wished her with a quirky Instagram story: “When the 7-year-old’s been rejected but the 22-year-old hasn’t. Teach us your way please, Ananya Panday,” she wrote.

Almost every year, Suhana spends November 2 with Shah Rukh Khan and Shanaya and here’s how much fun it turns out to be each time. Here are glimpses shared by Shanaya’s parents Sanjay and Maheep Kapoor from past celebrations:

While Suhana Khan studying film at New York’s Columbia University, both Ananya and Shanaya have already forayed into Bollywood. Ananya Panday made her debut with Student Of The Year 2 last year then starred in Pati Patni Aur Woh while Shanaya began her journey in Bollywood as an assistant director for Gunjan Saxena: The Kargil Girl, starring her cousin Janhvi Kapoor. However, Suhana has made her magazine cover debut already and featured in a short film for school. Suhana can only take up as a career after finishing studies, as per dad Shah Rukh Khan’s mandate.