Concerns over Delhi’s annual (and increasingly worse) air pollution problem usually focus on stubble burning – the burning of farm wastes – in the neighbouring states of Punjab and Haryana. However, data suggests that while this contributes to the problem it is not the main cause.

In Punjab, where most of such incidents have taken place, the air quality is “moderate”. In Delhi it oscillates between “very poor” and “severe”. In fact, the contribution of stubble burning to Delhi’s pollution was only 16 per cent on Monday, according to monitoring agency SAFAR.

In further fact, a study published by the Council on Energy, Environment And Water (CEEW ) in March last year listed exhaust and emissions from vehicles as the largest contributor of PM2.5 pollutants in Delhi – between 18 and 40 per cent. Dust from roads, the study added, contributed around 36 to 66 per cent of PM10 pollutants.

Other sources, like a waste-to-energy plant near a landfill in East Delhi’s Ghazipur, add to pollution levels through emissions that can lead to reduced fertility, growth defects and cancer.

Qasim Khan, who has called Ghazipur home for the past two decades, told NDTV the plant is a “huge problem for local residents”.

“At night the smoke is so much that the next morning all our cars are covered in a layer of ash.80-85% people in the area have respiratory issues,” he said.

The Delhi government, which has launched a number of campaigns to control and rectify the situation, announced yet another today – “red light on – gaadi off” – urging people to switch off their vehicles at red lights to reduce emissions. 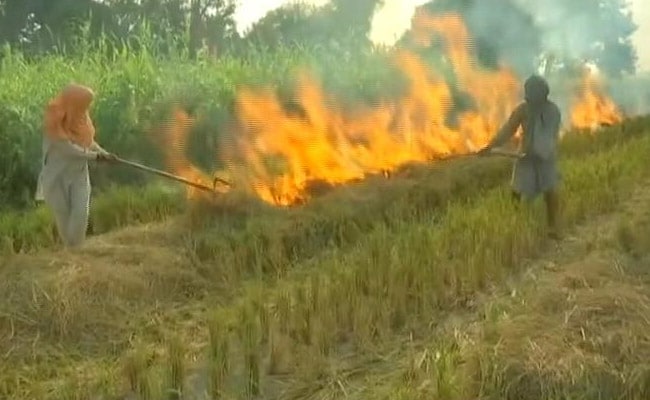 Air quality levels in Delhi have plummeted due to a host of problems, including stubble burning

Some other campaigns, however, like the introduction of 10,000 electric buses, have yet to materialise.

“In Delhi most people use private transport. Public transport needs to be available at a much larger scale (to convince them to switch over). More than 1,000 electric buses it is better to have 4,000 CNG buses… but this may take a few years, just like the transition to BS-6 vehicles. So we can’t rely on this right now,” Karthik Ganesan, a CEEW researcher, told NDTV.

Mr Ganesan said it was critical, for the here and now, to encourage people to use existing public transport since these are not being fully utilised.

He also highlighted the issue of waste management, saying: “We need to segregate at the household level. We cannot go on creating landfills like Ghazipur. Efficiently segregated waste is easier to compost and will lead to fewer emissions at a treatment plant.”

The Delhi government has launched a “war against pollution” and in a “war room” at the Secretariat, pollution levels of known hotspots are monitored 24*7. Complaints regarding violation of existing laws are also being closely monitored; these are received through the government’s “Green Delhi” mobile phone app.

However, the government does insist that stubble burning remains the primary offender when it comes to pollution levels in Delhi.

“Other pollution sources, such as vehicles and dust, are present all the year around but you never see such high AQI levels. They are higher now because of stubble burning,” Gopal Rai, the city’s Environment Minister, told NDTV.

Mr Rai pointed out that the AAP had introduced 1,500 new buses and planned to introduce 1,500 more. “To reduce dust pollution nobody acted as tough as us. We shifted at least 1,400 industries from polluting fuels to PNG and we are carrying out tree plantations,” he said.

“But we appeal to the centre, as well as neighbouring states, to come together and tackle stubble burning because this is a problem that affects all areas… not just Delhi,” he added.

The centre does seem to have heard that request. This morning it told the Supreme Court that it is planning a permanent body, via legislation, to deal with annual air pollution problem in Delhi and surrounding areas.