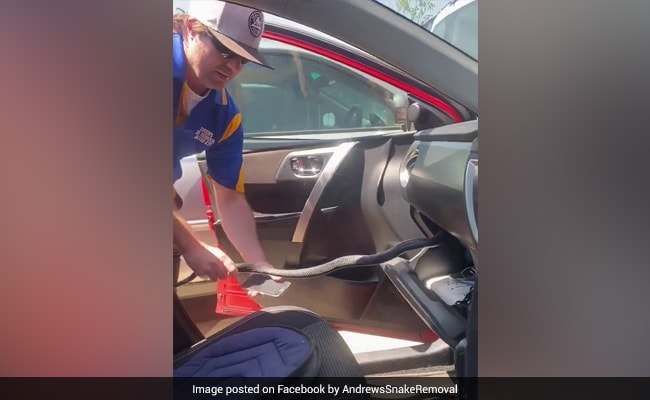 A woman in Australia found a venomous snake in her car’s glove box.

A woman driving her car did not realise that she was carrying an unwanted passenger in the glove compartment – a venomous snake. The Australian woman was behind the wheel when she noticed a red-bellied black snake in the glove box of her Toyota.

Andrew Smedley of Andrew’s Snake Removal said that he was called to a pharmacy in Queensland by the woman who noticed the venomous snake slithering inside the glove compartment. The driver, who has not been named, pulled into the chemist’s after spotting the hitchhiking snake.

“The lady driving obviously got a hell of a fright as she seen it coming out while driving & pulled in to the chemist,” Andrew’s Snake Removal said in a Facebook post, sharing a video showing how the snake was rescued from the car.

“It’s usually a nightmare to find a snake when its got in to a car but luckily found this guy pretty quickly,” the snake catcher added, saying that he found the red-bellied snake “sitting nice and content” in the glove compartment.

Since being posted online, it has garnered over 2,500 ‘shares’ and hundreds of comments.

“That’s the new social distancing tool you keep handy in the glove box, works a treat,” quipped one Facebook user. “That is my worst nightmare,” another said.

The red-bellied black snake is a species of venomous snake endemic to Australia.