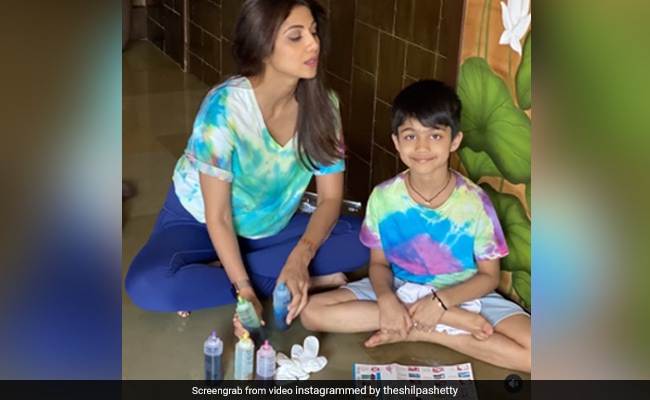 Shilpa Shetty and Raj Kundra’s son Viaan Raj Kundra, 8, dedicated his school project to Bollywood actor Sonu Sood. Shilpa shared a video of the project that her son created and she wrote: “Viaan’s school project, dedicated to a true hero Sonu Sood. Kids are keen observers of all that happens around them. Watching Viaan work on his recent school project reiterated this.” She added that the topic for his project was to talk about “people who made a difference.” The video showcases Sonu Sood’s constant efforts to reunite stranded migrants with their families, who had been walking home when the lockdown was imposed in March. The actor also launched a toll free helpline for migrants going home.

“With all that has happened in these past few months, he’s been observing and admiring all the work that my dear friend Sonu Sood has put in selflessly for the people in need. In times when everyone stayed at home with fear, he decided to be brave and put others’ pain before his feelings,” Shilpa added.

Later in the post, Shilpa Shetty wrote: “His brave and relentless service towards migrants who reached out to him really struck a chord with Viaan. So, he worked on this lovely animated video that he conceptualised, wrote, dubbed for, and edited as an ode to this hero (Viaan’s choice completely). I take immense pride in sharing this one with you all – a ‘proud mommy’ moment (Remember he’s only 8). This one is for you, Sonu.”

Reacting to Viaan Raj Kundra’s project, Sonu Sood wrote in his Instagram post: “Humbled. Thank you so much Viaan, Shilpa Shetty and Raj Kundra. Our hero Viaan is super talented. So, so proud of him. Love him loads.”

Shilpa Shetty married businessman Raj Kundra in 2009. The couple are parents to Viaan and a daughter named Samisha. In terms of work, she was last seen as one of the judges on the TV reality show Super Dancer Chapter 3, alongside choreographer Geeta Kapoor and filmmaker Anurag Basu. The actress will next be seen in Sabbir Khan’s upcoming film Nikamma. She is currently shooting for Hungama 2 in Manali.