Shelling, Missile Fire Ahead Of Ceasefire Between Armenia And Azerbaijan Over Nagorno-Karabakh 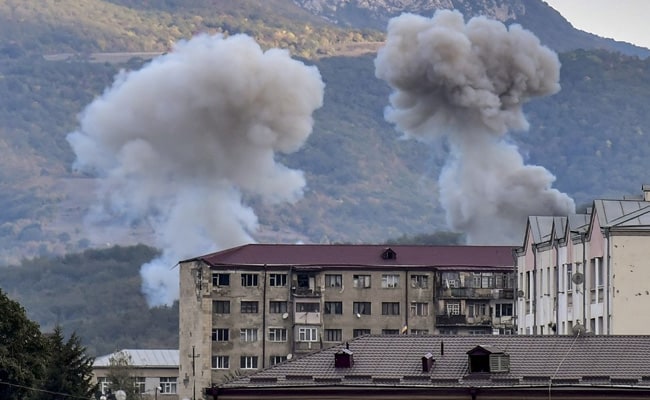 The bitter fighting in the Caucasus region has claimed hundreds of lives till now. (File)

Armenian and Azerbaijani forces accused each other of bombing civilian areas on Saturday morning ahead of a ceasefire agreed to end nearly two weeks of heavy fighting over the disputed Nagorno-Karabakh region.

The region’s ombudsman Artak Beglaryan said Azerbaijan had fired missiles on civilian areas of its main city Stepanakert, which has been under regular rocket and artillery fire.

“Baku uses the same style of #WarCrimes by the very last moment,” Artak Beglaryan said on Twitter, adding that there was no information yet on casualties.

An AFP journalist in the city reported hearing two explosions in the morning, after Armenia and Azerbaijan agreed to the ceasefire from noon Saturday (0800 GMT).

Armenia and Azerbaijan agreed to the ceasefire in the early hours of Saturday, after 11 hours of Russian-mediated talks in Moscow.

The bitter fighting in the Caucasus region has claimed hundreds of lives, forced thousands to flee, and stirred fears of a full-blown war that could suck in regional powers Turkey and Russia.

Russian Foreign Minister Sergei Lavrov said the two sides had agreed at the talks to begin “substantive negotiations” to end the conflict over Karabakh, an ethnic Armenian enclave that broke away from Azerbaijan during a war in the 1990s that claimed some 30,000 lives.