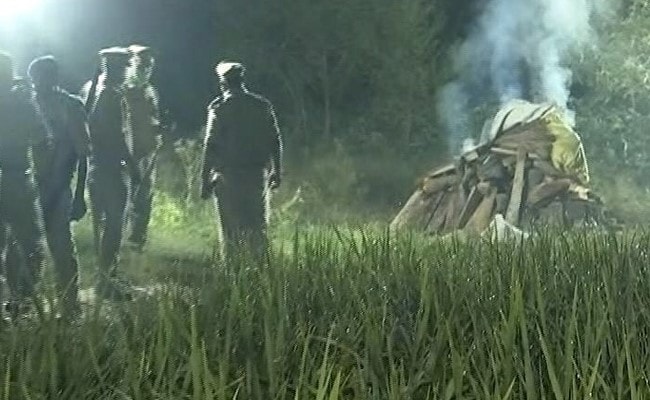 Hathras Case: A Dalit woman was assaulted by 4 “upper caste” men from her village on September 14 (File)

In a scathing attack on the BJP governments at the centre and in Uttar Pradesh, the Shiv Sena has questioned its former ally’s Hindutva ideology over the Hathras victim’s dead-of-night cremation, asking if her dying declaration that she was gang raped had no value. Shiv Sena has also called the manhandling of opposition leaders while trying to meet the victim’s family a “gang rape of democracy”.

“Atrocities against women have increased in Yogi Adityanath’s state. The Prime Minister may have the foundation for a Ram Temple, but UP does not have Ram Rajya (ideal governance); it has Jungle Raj… UP’s Chief Minister is a sage and the Prime Minister is a hermit, but they both have the best security (despite having nothing to lose); women do not have any security,” read an article in Shiv Sena’s mouthpiece Saamana.

Indicating at a senior UP police officer’s statement refuting rape by “quoting” the Hathras victim’s forensic report, the article stated that though the young Dalit woman gave a statement that she was gang raped, “the UP government says rape never happened”.

“Soon after, another rape happened in Balrampur, but even this did not move Delhi or the Yogi Adityanath government, which it instead questioned the outrage: Why is opposition crying when rape never happened?” the Sena added.

It seems the government is warning “dare not raise your voice… Ayodhya’s goddess Sita must also be worried”, the article stated referring to the UP Police cordoning the village for media and politicians for the last three days.

It further criticized Rahul Gandhi’s manhandling saying he was the grandson of Indira Gandhi and son of Rajiv Gandhi, both of whom “sacrificed their lives for the country”. Those who did not toil a day for this country are attacking Rahul Gandhi, the party said in favour of Congress, its alliance partner in Maharashtra.

“The victim’s family was locked in their house… Cremating the dead body of the victim by pouring petrol is inhuman. This is an insult to that woman and the Hindu culture… When saints were killed in Palghar the entire BJP was speaking about Hindutva, where is your Hindutva now?… Country was never helpless and dead before. Now, the society has become impotent and voters have become slaves. Please forgive us, brave lady,” the editorial said about BJP’s governance.

The article was published a day after the Uttar Pradesh police claimed the forensic report of her viscera had “no sperm sample” and so she was not raped or gang raped, despite the police earlier filing a case based on her statement given on September 22.

The state government has since tried to blame the opposition parties of trying to use the Hathras gang rape and murder to fan caste-based fire for political gain.

There have been numerous protests against the Hathras gang rape and murder, which is being compared with the 2012 Nirbhaya case because of the brutality of the assault.