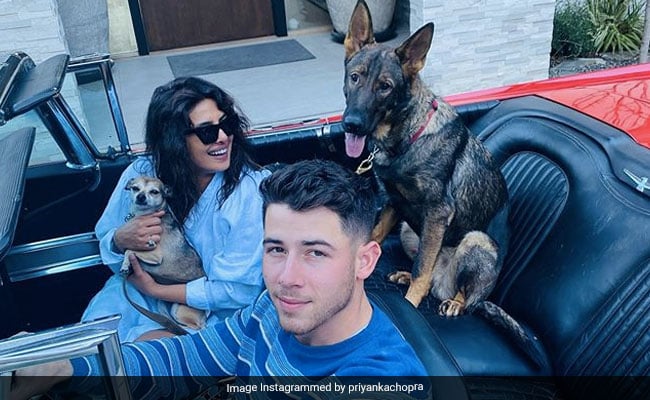 For Priyanka Chopra, “home is where the heart is.” Priyanka Chopra, who was in Berlin for work, recently flew back to Los Angeles and is so happy to be back. Priyanka announced her homecoming with a fabulous family photo of herself, husband Nick Jonas and two of their three fur-babies – Diana and Gino. After spending weeks in Berlin, looks like Priyanka was craving California air and right after landing in Los Angeles, she and Nick went out for a ride around Los Angeles. Reunited, Priyanka and Nick went cruising in a red convertible together with some country music on their drive-around-town playlist – Priyanka’s smile says it all, doesn’t it?

Earlier, Priyanka revealed she has taken off from Berlin with this Instagram story, writing: “Finally heading home.” Priyanka appears to have been in Berlin for her new Hollywood movie tentatively titled Text For You, which is the English remake of German-language 2016 movie SMS Fur Dich. Priyanka co-stars with Celine Dion and actor Sam Heughan in the film. 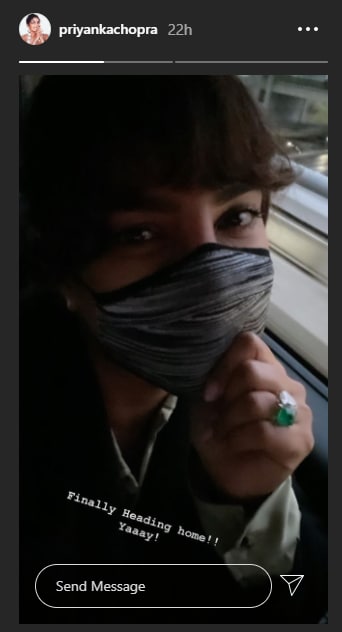 Priyanka Chopra bid adieu to Berlin with glimpses of a photoshoot and a shout-out for the luxury hotel she was staying in for arranging for a safe stay during the pandemic: “In these strange times it’s important to feel safe when you travel. So thank you to their staff who took every precaution to make me, my team and Diana feel safe and at home whilst filming in Berlin.”

Here are some more pages from Priyanka Chopra’s Berlin diaries:

Priyanka Chopra’s impressive list of upcoming projects also include Netflix films The White Tiger and We Can Be Heroes, Russo Brother’s Citadel and a film with actress-comedian Mindy Kaling. Priyanka has also been reportedly roped in as part of the cast of Matrix 4. Priyanka had also announced a sangeet-themed show with Nick Jonas for Amazon.