Actress Rakulpreet Singh is one of the few actresses who have carved their niche in both South and Hindi film industry. She is one of the busiest actresses toggling between states to keep up with her tight schedules but looks like she does not have much to complain about. The actress loves to eat clean, and while she is at it, she makes sure she is making the whole fare flavourful and fun. On Wednesday morning, the actress gave us a glimpse of her breakfast and we guess we are still drooling. Rakulpreet Singh shared an Instagram story that featured a plate of freshly made, crispy waffles that were topped with delish dressing, pomegranate seeds, pumpkin seeds and sunflower seeds, that happen to be an excellent source of protein, fibre and omega 3 fatty acids.

“Morning Yumminess. Who says healthy isn’t tasty. @akshayarora3 Thankuuu for these crisp crisp waffles,” she wrote in the caption of her Instagram story. 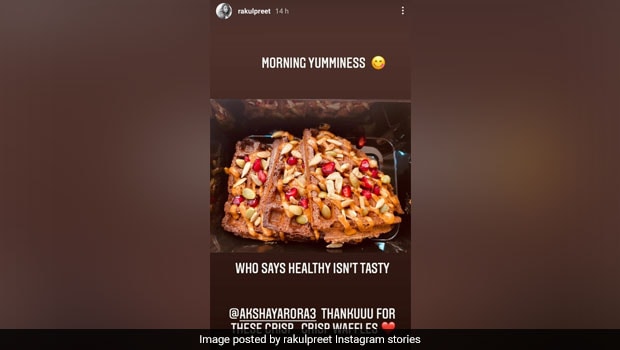 (Also Read: Sara Ali Khan Continues To Gorge On Some Delicious Foods Even After Maldives Vacation  )

Waffles are a breakfast favourite in many countries. Since waffles are not fried, they help you save many calories, but slathering them chocolate spread, whipped cream and candies could derail your diet goals. So take a cue from Rakulpreet and give your waffles a healthy twist, and your breakfast a yummy facelift.
Rakulpreet debuted in the Hindi film industry with ‘Yaariyan’. She is also a former beauty queen. Rakulpreet was also a part of ‘Marjaavaan’, a 2019 blockbuster starring Siddharth Malhotra and Riteish Deshmukh.

(This content including advice provides generic information only. It is in no way a substitute for qualified medical opinion. Always consult a specialist or your own doctor for more information. NDTV does not claim responsibility for this information.)

About Sushmita SenguptaSharing a strong penchant for food, Sushmita loves all things good, cheesy and greasy. Her other favourite pastime activities other than discussing food includes, reading, watching movies and binge-watching TV shows.