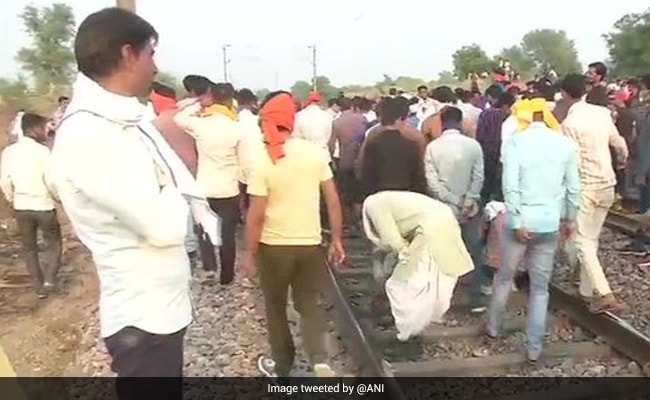 Members of the Gujjar community have occupied railway tracks in Rajasthan’s Bharatpur in their protest seeking reservation in jobs and education, officials said. Some train movement has been affected, including the Delhi-Mumbai Rajdhani Express. Officials said half a dozen other trains whose schedule has been hit by the protest include Awadh Express, Amritsar-Bandra, and Indore-Nizamuddin Express.

The Gujjars have been protesting for reservation intermittently since 2007. They have been given 5 per cent in a special category, but it has been struck down a number of times by court as it exceeds the 50 per cent limit set by the Supreme Court.

Gujjar leader Vijay Bainsla today said their protest for reservation in jobs and education as a “most backward class” community will continue until their demands are met, news agency ANI reported. Hundreds of Gujjar community members in Bharatpur are protesting under Mr Bainsla’s leadership.

“Young people are not getting jobs. There is anger among them. Our movement will continue. We have spoken to (Ashok) Gehlot ji, but nothing has happened so far,” Mr Bainsla told ANI.

“We have not spoken to anyone. Youth is unemployed, 25,000 jobs are stuck and nobody is talking about it. This protest will continue until our demands are not fulfilled,” Mr Bainsla added.

“We have spoken to Gehlot ji four times in the past but nothing materialised. It’s been two years, how much patience do they demand from us?” Mr Bainsla said.

Reports said the Gujjar community has been divided into two factions – one led by Himmat Singh Gujjar has agreed with the Rajasthan government’s cabinet sub-committee on 14 points following talks on Saturday, while the other led by Mr Bainsla is continuing with the protests.

“We had a very positive discussion and we are satisfied with the 14 points that we have agreed on. There is no need for agitation and we hope the government will meet its promises,” said Himmat Singh Gujjar, whose delegation met with Rajasthan minister Raghu Sharma.

According to the Rajasthan High Court’s directives issued in 2007, a mahapanchayat can only be held after an undertaking has been submitted to the district collector.

Also, as per the National Disaster Management Act and the Rajasthan Epidemic Ordinance, 2020, during the COVID-19 crisis a congregation of more than 100 people could not be held in the state.

The Rajasthan government on October 26, 2018, passed a bill that increased the Other Backward Classes (OBC) quota from 21 per cent to 26 per cent.

In December 2018, the state government approved one per cent reservation for Gujjars and four Other Backward Classes.

These communities are getting one per cent separate reservation under the legal limit of 50 per cent reservation meant for the most-backward category in addition to OBC reservation.

With inputs from PTI