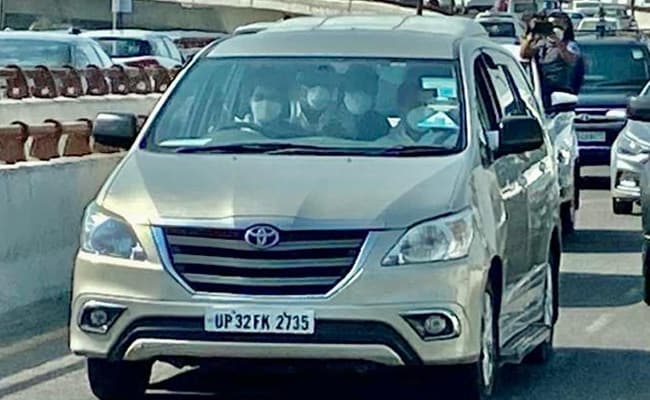 Congress leader Priyanka Gandhi Vadra was seen driving brother Rahul Gandhi as the two led a delegation of party MPs to Uttar Pradesh’s Hathras on Saturday afternoon to meet the family of the 20-year-old Dalit woman who died after she was assaulted and allegedly gang-raped.

Priyanka Gandhi was seen driving a silver Toyota Innova with her brother Rahul Gandhi sitting next to her. Congress MP Shashi Tharoor also posted a picture of him driving a car and said he was headed to Hathras, about 200 km from the national capital.

A large number of policemen lined the Delhi-Uttar Pradesh border with barricades on Delhi-Noida Direct (DND) flyway and stopped the Congress leaders at the border. They eventually allowed the two Congress leaders and three others to proceed.

On Thursday, the Gandhis along with several party leaders and workers were briefly arrested by the police and sent back to Delhi, after they tried to visit Hathras to meet the family of the Dalit woman.

In a tweet in Hindi using the hashtag ”HathrasHorror”, Rahul Gandhi said the behaviour of the UP government and police with the woman and her family “is unacceptable to me. No Indian should accept this.”

Mr Gandhi asserted that “no power in the world can stop me from meeting this grieving family in Hathras and share their pain”.

Lashing out at the Yogi Adityanath administration, Priyanka Gandhi said the UP government is “morally corrupt”.

“The victim did not get treatment, her complaint was not registered on time, her body was forcibly cremated, the family is in captivity, they are being suppressed — now they are being threatened that they will have to undergo a narco test,” she said in a tweet in Hindi.

“This behaviour is not acceptable to the country. Stop threatening the victim”s family,” she said.

The party alleged that the woman and her family have been denied justice and “severely traumatised” by the BJP government in their attempt to hide the truth of the heinous crime perpetrated on her.

The Dalit woman was allegedly raped and tortured at a village in Hathras by four men from a so-called “upper caste” community on September 14. After her condition worsened, she was referred to the Delhi’s Safdarjung Hospital where she died on Tuesday.

She was cremated in the early hours of Wednesday by the policemen while her family was locked up in their homes. Even now, the police have laid a siege around their home and the village to stop the media and politicians from visiting.