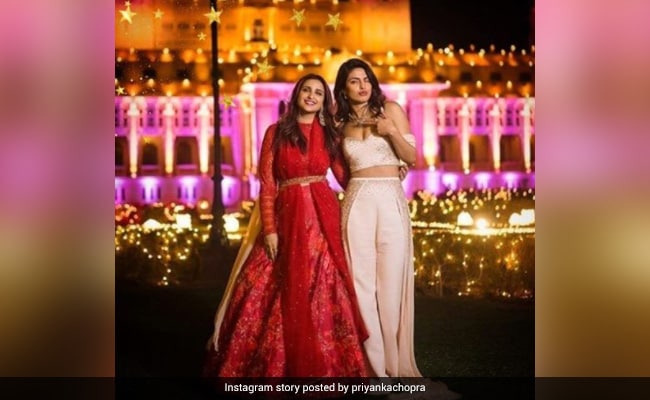 Priyanka Chopra, who is currently staying in Los Angeles with her husband and singer Nick Jonas, shared a birthday greeting for her cousin Parineeti Chopra on her Instagram story on Thursday afternoon. The picture that Priyanka posted, happens to be from her wedding festivities that took place in Umaid Bhavan Palace in Jodhpur in 2018. The Chopra sisters can be seen happily posing for the camera in the picture. “Happy birthday Tisha (Parineeti’s nickname). Sending you a big hug and miss you tons,” Priyanka Chopra wrote in her birthday wish for Parineeti, adding a few heart emojis to the post.

This is what Priyanka Chopra posted: Priyanka Chopra and Parineeti dubbed for the characters of Elsa and Anna, respectively for the Hindi rendition of the Disney film Frozen 2. Earlier, Parineeti said she wants to make an action film with Priyanka and told news agency PTI, “I had recently also said that if any producers or directors are making an action film, we would love to work together on it. We both have spoken a lot about working together, but the script should be correct.”

Priyanka Chopra was last seen in the 2019 film The Sky Is Pink with Farhan Akhtar and Zaira Wasim. The actress has many projects scheduled, which include We Can Be Heroes and a film with comedian Mindy Kaling. The actress also signed Amazon’s Citadel and Sangeet Project. The actress also shared the cover of her memoir Unfinished, recently.

Parineeti Chopra has several projects lined-up, which include the Saina Nehwal biopic, Sandeep Aur Pinky Faraar, Netflix’s The Girl On The Train. Parineeti, who made her Bollywood debut with the 2011 film Ladies vs Ricky Bahl, is best-known for her performances in films such as Golmaal Again, Hasee Toh Phasee, Ishaqzaade and Kill Dil among others.

No Sipper For Stan Swamy: Justice Or Cruelty?