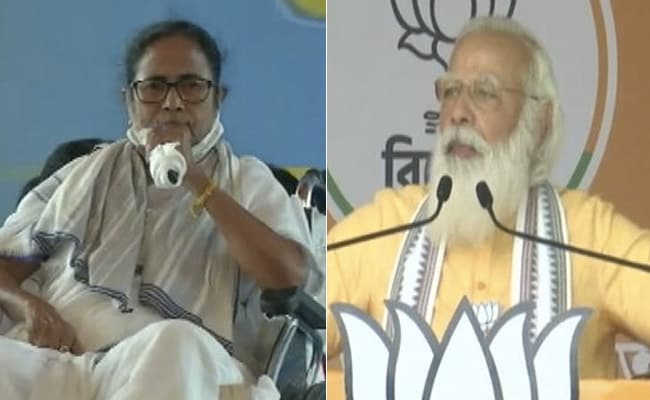 Prime Minister Narendra Modi and West Bengal Chief Minister Mamata Banerjee took swipes at one another at simultaneous election rallies in Bengal at the moment. PM Modi added a twist to his “khela hobe (sport on)” dig at his rival Trinamool Congress chief – he mentioned it is “khela sesh (sport over) if gamers hold criticising umpires”, alluding to the Trinamool’s repeated criticism of the Election Fee.

Ms Banerjee, campaigning at North 24 Parganas district, simply 58 km from Tarkeshwar, the place PM Modi was giving an election speech, attacked the BJP utilizing the Trinamool’s major weapon – that of calling the BJP a celebration of “outsiders” in Bengal.

“BJP needs to divide Bengal… These individuals need to finish Bengal, its language, its tradition,” Ms Banerjee, on a wheelchair nursing her plastered leg, mentioned. “I request to all of the minority brothers and sisters to not enable their vote division,” she mentioned.

The third of the eight-phase election in Bengal can be held on April 6.