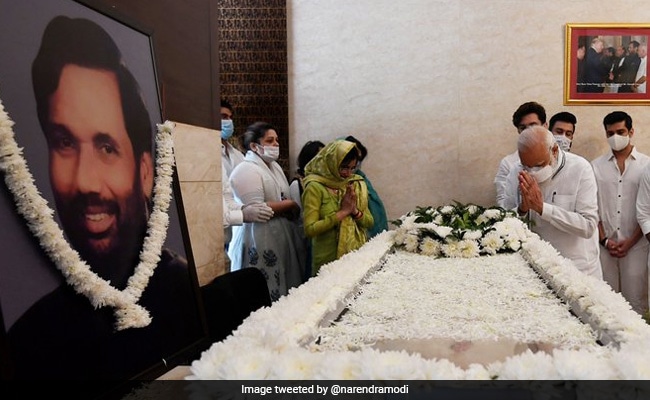 PM Modi was accompanied by senior BJP leaders including party president JP Nadda at Mr Paswan’s residence where the body of the Bihar politician is kept.

Mr Paswan, who was a minister in PM Modi’s cabinet, died at a Delhi hospital on Thursday where he was recuperating from heart surgery. He was 74.

PM Modi, in his condolence message yesterday, had remembered the Dalit icon was a friend and valued colleague whose interventions during Cabinet Meetings were insightful.

Working together, shoulder to shoulder with Paswan Ji has been an incredible experience. His interventions during Cabinet Meetings were insightful. From political wisdom, statesmanship to governance issues, he was brilliant. Condolences to his family and supporters. Om Shanti.

His body was brought from the All India Institute of Medical Sciences (AIIMS) early this morning.

Congress leader Rahul Gandhi, in a condolence letter to Mr Paswan’s son, Chirag, remembered  the LJP leader for giving voice to the most marginalised sections of the society. “As a Member of Parliament and Union Minister, he voiced their interests and concerns wth passion. His unwavering commitment to socialjustice and equality is particularly relevant in these times,” Mr Gandhi wrote.

Flags at Rashtrapati Bhavan and Parliament are flying at half-mast to condole the death of the Union Minister.

Ram Vilas Paswan has been a minister in almost all Central governments formed since 1989 and served six Prime ministers, starting with the cabinet of VP Singh. In PM Modi’s cabinet, he was in charge of the Consumer Affairs, Food and Public Distribution portfolios.

With inputs from agencies