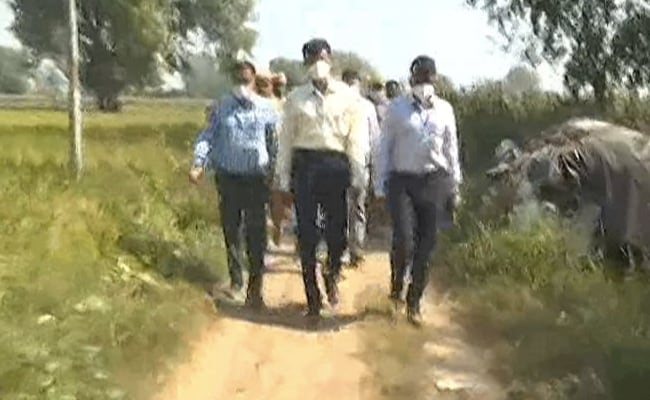 Hathras: The SIT visited the woman’s village, the site of the attack and the cremation on Tuesday.

A Special Investigation Team or SIT inquiring into the alleged gang rape and torture of a young Dalit woman in Uttar Pradesh’s Hathras has been given 10 more days to deliver its findings. The team was to submit its report today but has been given an extension on the orders of Chief Minister Yogi Adityanath, a top official said today.

“Following the orders of Chief Minister Yogi Adityanath, the time given to the SIT to submit their report to the Chief Minister has been extended by 10 days,” Awanish K Awasthi, UP Additional Chief Secretary, Home Department, was quoted as saying by news agency ANI.

Yogi Adityanath had ordered the investigation amid nationwide outrage after the woman died last week of severe injuries from the assault by four upper caste men from her village on September 14.

The UP government and the police face allegations of trying to cover up the crime after responding poorly to the complaints of the woman’s family. The scrutiny intensified after the Hathras police, after the woman’s death on September 29, cremated the body at 2.30 am at her village, against the wishes of her family. Her parents had pleaded with the police to be allowed to take her body and perform her funeral the next morning.

The three-member SIT visited the woman’s village, the fields where she was attacked, and the site of the cremation yesterday. The team was accompanied by a forensic expert as it examined the fields where the 20-year-old was found severely injured, bleeding and with her tongue cut.

“Our probe will be completed by tomorrow. We hope that we can submit the report to the state government tomorrow itself. If we’re unable to complete the probe due to any reason, we can another day or two,” sources in the probe panel had said yesterday.

The UP police, fighting off allegations of lapses in its response to the case, alleges that there was no rape or gang rape involved and that a forensic report proves it. That claim has been questioned by experts who point out that the samples were taken 11 days after the woman was attacked.

The victim was cremated in the middle of the night “to avoid large-scale violence” the next morning, the Uttar Pradesh government told the Supreme Court on Tuesday, citing intelligence inputs of “major law and order problems”.