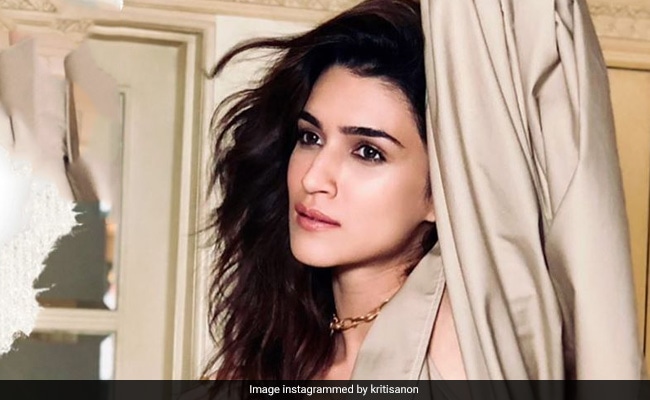 Kriti Sanon, who frequently shares posts from her random musings, added another one to her collection on Wednesday. The actress shared a stunning photograph of herself and she poured her heart out Instagram. Adding the hashtags #BeMyPoetry, #JustScribbling and #PoeticSoul to her post, Kriti Sanon wrote of unspoken conversations in her post. “That moment, that gaze, when you look at him and see the reflection of your love pour into his eyes… Not a word spoken but what a conversation that is,” she wrote in her caption. Kriti added, “If you’ve ever felt it, you’d know what I’m talking about.” Kriti’s Dilwale co-star Varun Dhawan wrote in the comments section: “Right now you must only follow this rule. #socialdistancing.” Varun’s comment was liked by over 1,700 people on Instagram. 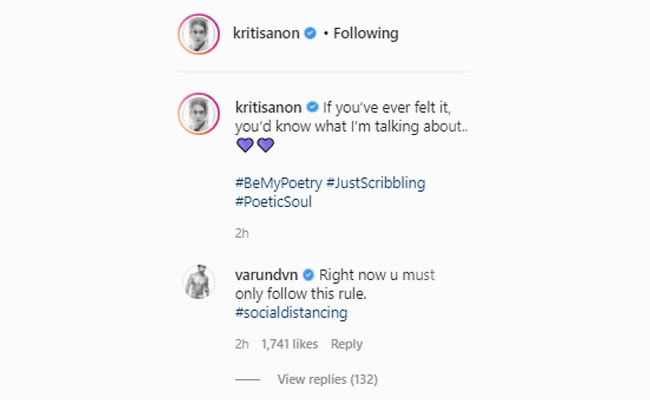 Other than the 2015 film Dilwale, directed by Rohit Shetty and starring Shah Rukh Khan and Kajol, Varun Dhawan and Kriti Sanon shared screen space in the song Aira Gaira from the film Kalank.

Kriti Sanon was last seen in the Ashutosh Gowariker-directed 2020 period drama Panipat, in which she played the role of Parvati Bai, the second wife of Sadashiv Rao. Kriti had a busy year in 2019 with films like Arjun Patiala, Housefull 4 and Luka Chuppi hitting the screens. Her next release is Laxman Utekar’s Mimi, a remake of the National Award winning 2011 Marathi film Mala Aai Vhhaychy! The actress made her Bollywood debut with the 2014 film Heropanti, co-starring Tiger Shroff.

Varun Dhawan was last seen in Street Dancer 3D, which also starred Shraddha Kapoor and Nora Fatehi. The actor will next be seen in Coolie No 1 remake, which has been directed by his father David Dhawan and stars Sara Ali Khan.