Nitish Kumar To Be Chief Minister For 4th Term, May Take Oath Tomorrow 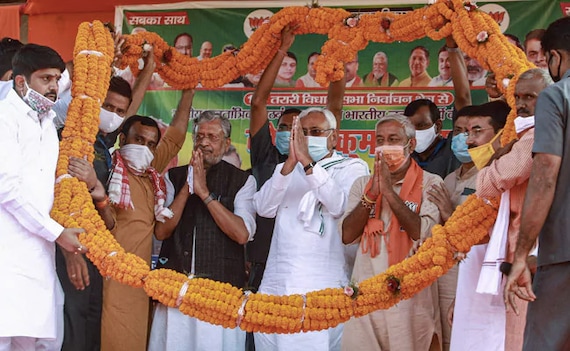 The alliance has got 125 of Bihar’s 243 assembly seats, three above the halfway mark.

Nitish Kumar will be the Chief Minister of Bihar for a fourth straight term, the NDA said today after a meeting of its legislators. The NDA, which won the recently-concluded election in Bihar with a wafer-thin majority, will now go to the Governor to stake claim to form government, sources said. The oath ceremony is likely to take place tomorrow, sources said.

The alliance has got 125 of Bihar’s 243 assembly seats, three above the halfway mark.

The MLAs of the ruling alliance formally named Mr Kumar today amid speculation about a change.

The Chief Minister’s Janata Dal United has delivered an abysmal performance, slipping from the 71 seats it won in 2015 to 43, giving the BJP — which won an unprecedented 74 seats — the upper hand in the alliance.

While the BJP had declared before and after the election that Mr Kumar will remain its Chief Ministerial candidate,  a section within the BJP maintained that it should not be considered a given in view of the JD(U)’s disastrous performance.

Mr Kumar had betrayed a certain nervousness last week, telling the media that the NDA will take a call on the Chief Ministerial candidate.