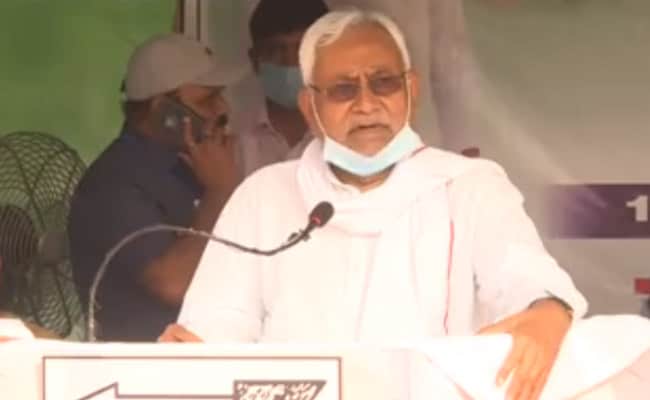 Bihar Chief Minister Nitish Kumar Thursday backed population-based reservation for castes, but said it can only be implemented after census data is available.

Addressing a poll rally, he also attacked the RJD over its record on law and order, and ridiculed Tejashwi Yadav’s promise of 10 lakh jobs.

He repeatedly told the people that his government has worked for the development of Bihar with the cooperation of the Central government led by Prime Minister Narendra Modi.

Valmiki Nagar Lok Sabha seat will go for by-poll on November 7. The by-election has been necessitated there due to death of JD(U) MP Baidyanath Mahto.

“And as far as the question of population is concerned that is decided only after census and that decision (on census) is not in our hands. We would like that reservation be proportionate to population of castes. We have no two opinions on it,” he said.

Though in his speech Thursday, Mr Kumar did not specify if he was talking about caste-based census data, he has often demanded the 2021 census brings out that data.

He has on several occasion in the past said that all castes should get reservation proportionate to their population.

He said the people gave him 15 years to serve and if they elect his government again he would go among the public to discuss the problems that have not been addressed and work on them.

On Yadavs promise of sanctioning 10 lakh government jobs in his first cabinet meeting, Mr Kumar said, “I say that one crore students have passed 10+2 exams (intermediate exam) in the past 10 years, why not give job to all of them?”

“Will the funds come from sky for these jobs? he mockingly asked.

Mr Kumar claimed that when the RJD was in power for 15 years, it gave jobs to just 95,000 people, while during his 15-rule six lakh people got jobs and other work opportunities were also made available.

He addressed a rally at Sikta assembly seat too, where he said, “Some people want to create discord in the society, but I request you with folded hands live with harmony.”

He once again said that for him entire Bihar is family, whereas “some people” work just for their family which includes husband, wife and children.

His barb was apparently directed at his bete noire Lalu Prasad.

He said some people are “unhappy” with him for imposing prohibition.

He said earlier there used to be numerous incidents of murder and massacres, but his government has controlled crime and established the rule of law.

He said that his government has ensured development along with justice for all sections of society including the Scheduled Castes, Scheduled Tribes, Backward Classes, Extremely Backward Classes and Mahadalits.