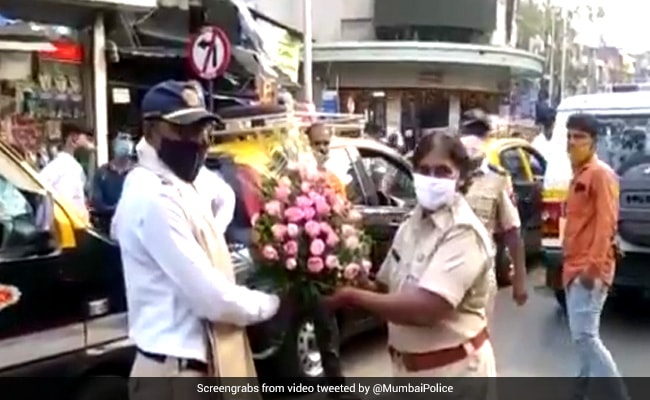 Head Constable Eknath Parte was lauded by his seniors for not losing his temper, the police said

A traffic policeman, who was beaten up by a woman in south Mumbai after he intercepted her for travelling on a two-wheeler without helmet, was felicitated by his seniors at the same spot to express appreciation for his selfless service.

A video of the felicitation was posted by the Mumbai Police on its Twitter handle on Thursday.

Head constable Eknath Parte was beaten up by a woman on October 23 at the Cotton Exchange Naka in south Mumbai’s Kalbadevi area and a video of the incident later went viral on social media.

Several people demanded strong action against the woman and her associate who was with her on the two-wheeler for attacking the police, who are performing their duty amid the COVID-19 pandemic, a police official said.

The accused were later arrested, he said.

Eknath Parte was lauded by his seniors for not losing his temper while the woman was thrashing him, he said.

He was felicitated by Assistant Commissioner of Police Lata Donde and a video of the same was posted on the Mumbai Police’s Twitter handle.

The police in a message on Twitter said, “Apart from appropriate action being taken against the accused persons, it was equally important for head constable Parte to be given the respect he deserves in the same public view at the same spot where his selfless service was disregarded.”

In another tweet, the police said, “A video went viral on social media of a woman physically assaulting HC Eknath Parte.”

“A case has been filed against the two accused & as a gesture of solidarity towards police personnel working 24/7 across Mumbai, HC Parte was felicitated at the site of the incident #RespectForAll,” the police said.