More Than 8,000 Evacuated In Maharashtra’s Solapur District After Heavy Rain 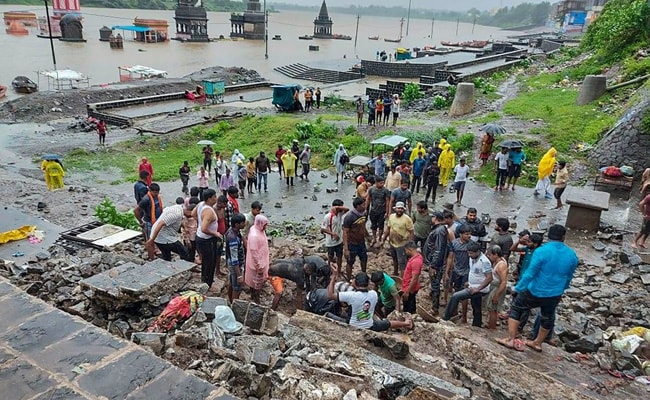 On Wednesday, 6 people died when a wall collapsed in Pandharpur town, in Solapur district

Over 8,000 people from Pandharpur tehsil in western Maharashtra’s Solapur district have been shifted to safer places following heavy rains, an official said today.

The district is witnessing heavy showers for the last two days.

“Excess water is being released from Ujani Dam into the Nira and Bhima rivers, so as a precaution, around 8,400 people living along river banks in the Pandharpur tehsil have been shifted to safer places,” said Sachin Dhole, Sub Divisional Officer.

As water is being released from the dam at 2.3 lakh cusecs, villages along the Bhima have been put on alert, he said.

In Pandharpur town, some 1,650 people were shifted to schools and buildings of religious institutions and are being provided food, Mr Dhole said.

Several roads leading to the temple town were flooded and closed for traffic for some time, he added.

Additional teams of the National Disaster Response Force (NDRF) have been sought for the tehsil, he said.

NDRF personnel were also deployed in a few villages in Mohol tehsil to evacuate people stranded in floodwaters.

“Around 50 people who were stranded in remote areas of Ghatni and Kharkhatne villages have so far been evacuated with the help of an NDRF team,” a district official said.

On Wednesday, six people were killed when a wall collapsed in Pandharpur town.

State Deputy Chief Minister Ajit Pawar today ordered a probe into the incident, saying a case of culpable homicide be registered against those responsible.

A Special Performance By The Couple And Other Viral Videos