Man Cuts Palm Tree… While Sitting On It. Watch What Happens 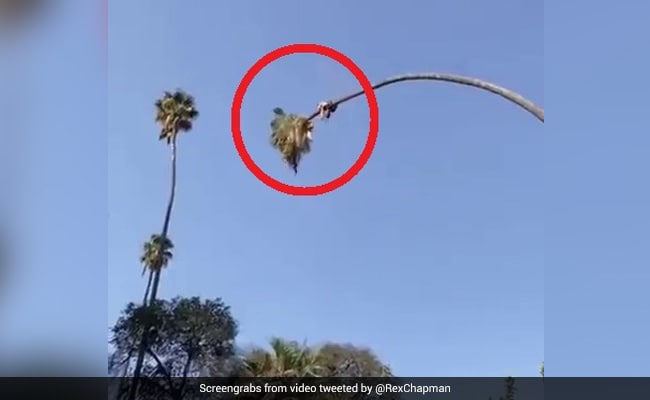 A viral video shows a man trimming the crown of a palm tree.

A viral video that shows a man cutting a palm tree has left millions stunned. What is remarkable about this clip is the method employed by the man to chop down the tree. Instead of standing on the ground, he appears to have climbed up the tree and was filmed sitting on its trunk even as he proceeded to cut it off.

The video was shared on Twitter by former American basketballer Rex Chapman. It shows a person sitting near the top of a tall palm tree and using a chainsaw to cut it. The tree bends forward halfway as the man clings to it. After he chops off the top part of the tree, the trunk sways wildly – leading many to assume that the man would fall off. However, he manages to hold on to the swaying tree as its top part, including the leaves, fall to the ground.

“Ever seen anyone cut a really tall palm tree?” asked Rex Chapman while sharing the video on Twitter.

Since being posted on Friday, the 34-second clip has been viewed more than 6.6 million times on the microblogging platform. It has garnered nearly 20,000 ‘retweets’ along with hundreds of comments.

“Raise your hand if you were expecting the guy to fly off the tree,” wrote one person.

“Nope nope nope,” another said, while a third Twitter user remarked, “It’s not just the hanging on, the guy was holding a running chainsaw too!!!”

Some asked why the tree could not be chopped from the bottom – and other Twitter users explained that cutting it down from the bottom would entail the risk of the tree falling on powerlines or buildings nearby.

“These trees are all over Los Angeles. There are homes in every direction. Those crowns sometimes fall and kill people. It was to be dealt with,” a Twitter user explained in the comments section.

What do you think of the video? Let us know using the comments section.