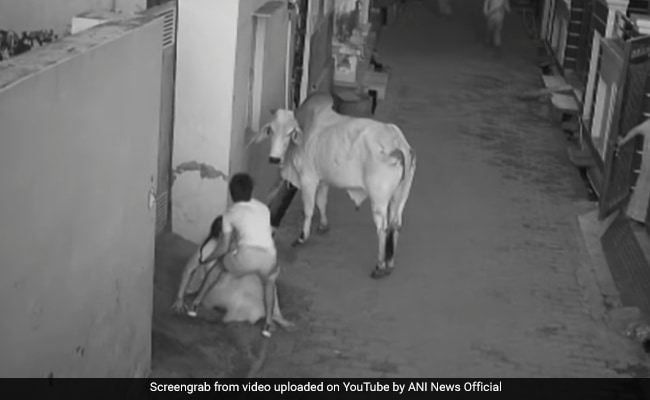 A young boy was filmed trying to save his grandmother from an angry bull.

A boy in Haryana rushed to save his grandmother from a “mad” bull and was attacked by the animal in the process, hair-raising CCTV footage shows. The incident was reported from Haryana’s Mahendragarh on Monday.

Footage shared by news agency ANI shows the elderly woman walking down a road when the bull charges at her and knocks her to the ground in a completely unprovoked attack. Witnessing this, the woman’s grandson attempts to rush to her aid. The angry bull, however, knocks the boy to the ground as well and kicks him furiously before he manages to get away.

The boy then runs straight to his grandmother and tries to help her up. The two only manage to walk a few steps before the relentless bull attacks them again – this time knocking both of them to the ground. The video shows people coming out of their houses to help the woman and her grandson.

According to ANI, three people were injured by the bull. The boy also suffered injuries. “A boy saved his grandmother after a mad bull attacked her in Haryana’s Mahendragarh on September 28,” the news agency wrote while sharing the footage on YouTube. Watch it below:

Footage of the bull attack has gone viral on social media, garnering thousands of views and shocked comments across platforms like YouTube and Twitter. Many social media users praised the boy for the courage he displayed.

Veteran sharp shooter Chandro Tomar was among those who shared the footage while praising the boy’s act as worthy of respect. IPS Dipanshu Kabra also tweeted about the incident, writing: “No amount of praise is enough for this brave child.”