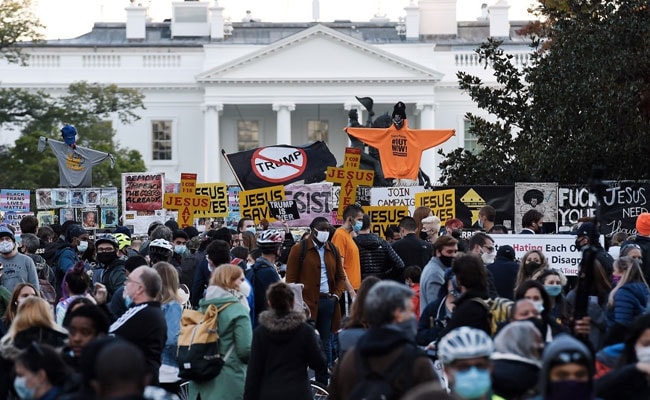 US Presidential Election 2020: Demonstrators rally near the White House in Washington, DC.

Hundreds of Joe Biden supporters rallied at the White House Tuesday evening, fueling a festive atmosphere with blasting music and dancing activists who voiced faith Democrats could win back the presidency.

The area, recently named Black Lives Matter (BLM) Plaza by the mayor of Washington, was the focal point of opposition to President Donald Trump during racial justice protests over summer.

Dozens of the city’s police watched the crowds, who were kept hundreds of yards (meters) away from the White House perimeter by a fence surrounding Lafayette Square. A new, unscalable barricade has also gone up inside the perimeter.

“I’m here to celebrate, hopefully, the president getting out of here, an early celebration,” Malik Williams, a 27-year-old school counselor from Maryland, told AFP.

Williams, who took part in the BLM protests, said he was buoyed by the polls and early voting records, adding: “I think everything will work itself out.”

“I’m not honestly not concerned at all, I think he’s gonna lose and I think it’ll be a historic loss,” he added.

Some had traveled from far and wide to be in the US capital on election day.

Ruby Estoy, 40, and her friend Concetta Leanza, 34, together with Leanza’s terrier Hercules came from Florida on Sunday.

“We came here just to feel the energy and to be here, and to really make sure that our voices get heard,” said Estoy.

The pair, who both work in the financial sector, said they voted early for Biden, but added they are “unsure” how their candidate would perform in their home state — a traditional battleground that is leaning toward Trump, according to polls.

“Vote him out!” added Estoy.

Another pair of friends, Traci from Pennsylvania and Lori Ricks from Maryland, also said they had come to soak up the atmosphere and root for a Trump loss.

The two women, in their mid-fifties, said they took the day off work to be there.

She gestured to the perimeter barrier designed to keep protesters at bay.

“This has never happened before in an election. They never had to fence up the White House, board up the windows for an election. I think it says so much,” she said.