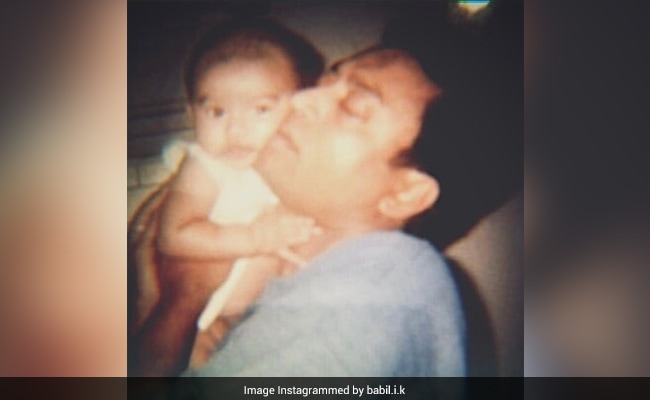 Irrfan Khan’s son Babil, who frequently shares throwback pictures of his late father on his social media handle, added another one to his collection. On Sunday, Babil  posted a million-dollar photograph on his Instagram profile, which happens to be from the time when he was an infant. In the picture, little Babil can be seen curled up in his father Irrfan Khan’s arms. He accompanied the post with a heartfelt caption that read, “Death is painful for the living, for those dearest to your heart, but you taught me that death is only the beginning. So I’m here celebrating your life in my mind, divine bitter-sweetness. I was listening to ‘The Beatles’ then you got me obsessed with ‘The Doors’ and we used to sing along. I sing those songs still now, I feel you then.”

On Saturday, Babil shared a few pictures of himself and he captioned his post: “Going to watch The Lunchbox for the 13th time like…” See the post here:

Irrfan Khan died at a Mumbai hospital on April 29, this year. He battled a tumour for several months and returned to Mumbai after being treated in London. Irrfan Khan is survived by his wife Sutapa and two sons Babil and Ayan.

Irrfan Khan starred in several critically acclaimed as well as commercially successful films. Maqbool, Haasil, Paan Singh Tomar, Haider, Pinku, Talvar and the Academy Award-nominated Salaam Bombay! are just a few of them. The actor, who acquired a star status over the years, also featured in international projects like The Namesake, Life Of Pi, Inferno, Slumdog Millionaire and The Warrior among others. His last project was Angrezi Medium, co-starring Kareena Kapoor and Radhika Madan.