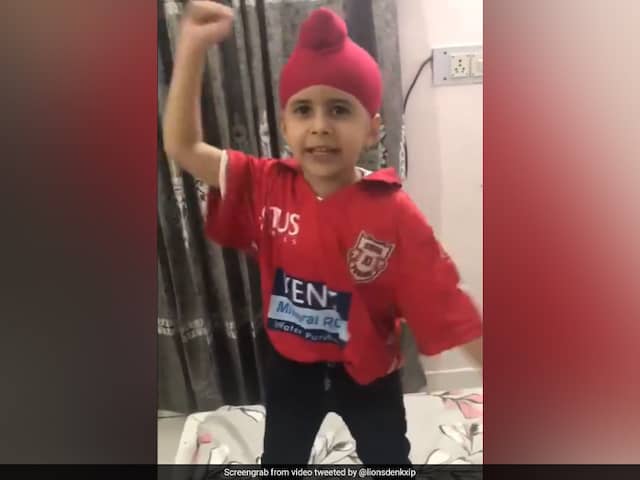 IPL 2020, KXIP vs MI: The young fan can be seen cheering for Kings XI Punjab© Twitter


With Indian Premier League (IPL) 2020 finally in full flow, Kings XI Punjab (KXIP) are set to face Mumbai Indians (MI) in the 13th fixture of the season at the Sheikh Zayed Stadium, Abu Dhabi. Ahead of the match, the club took to Twitter to share a video of a super cute child fan. The young fan can be seen cheering for KXIP in an excited manner and dances on the bed. The video has been captioned as, “The cutest thing you’ll see today! #SaddaPunjab #IPL2020 #KXIP #KXIPvMI”.

Despite a strong batting display, KXIP have been erratic in terms of results. They began their campaign with a Super Over defeat to Delhi Capitals (DC). It was followed by a huge 97-run win over Royal Challengers Bangalore (RCB) and a four-wicket defeat to Rajasthan Royals (RR).

Despite their patchy results, KXIP have scored plenty of runs. Mayank Agarwal in particular has been in terrific form. He has scored 221 runs this season, only behind KL Rahul (222) in the race for the Orange Cap, and slammed his maiden IPL century too this season. Agarwal boasts an impressive strike rate of 170.00.

Meanwhile, MI began their new season with a five-wicket defeat to Chennai Super Kings (CSK). In their next match, they defeated Kolkata Knight Riders (KKR) by 49 runs but lost in the Super Over to RCB in their third match.

KXIP and MI have faced each other 24 times in the IPL with the latter coming out on top with 13 wins. KXIP have registered 11 wins.