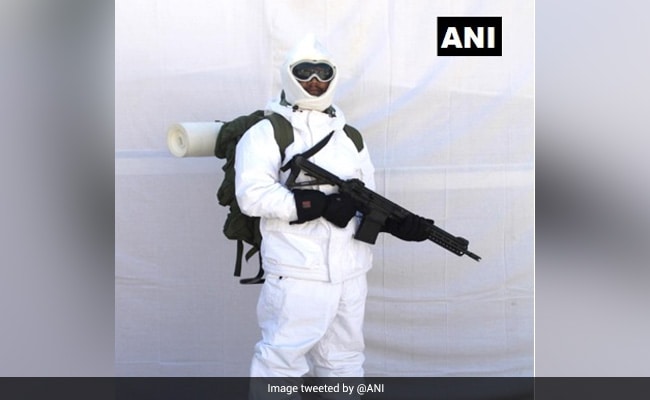 The army is providing new habitats and clothing to soldiers to help beat winters.

Indian soldiers are all set to brave the harsh winter in eastern Ladakh with the latest in extreme cold weather clothing imported from the US as the standoff with China shows no sign of easing.

A photo released by defence sources to news agency ANI on Wednesday showed a soldier of the Indian army wearing the all-white attire along with a recently acquired SIG Sauer assault rifle.

The army is providing new habitats and clothing to soldiers to help beat winters during deployment along the China border, ANI reported.

The Indian Army had received the first batch of the extreme cold weather clothing from the US on Tuesday, reports had said.

The Indian Army maintains a stock of 60,000 of these extreme cold weather clothing sets for troops deployed in the entire Ladakh region including both western fronts in Siachen and Eastern Ladakh sector, sources told ANI.

This year, there was a need for an additional 30,000 of these sets as close to 90,000 troops are posted in the region to counter Chinese aggression along the Line of Actual Control or LAC.

The delivery of the American gear comes days after a visit by the US Secretary of State Mike Pompeo and Defence Secretary Mark T Esper for crucial talks to boost defence and security ties between the two countries.

With strong words for China, Mr Pompeo said the US “stands with India to deal with any threat”.

The tension between India and China in eastern Ladakh peaked in June this year in a clash that left 20 Indian soldiers dead and an unspecified number of Chinese casualties.

The two countries have moved tens of thousands of troops and weapons into the high-altitude region since March and several rounds of talks have failed to significantly ease tensions.