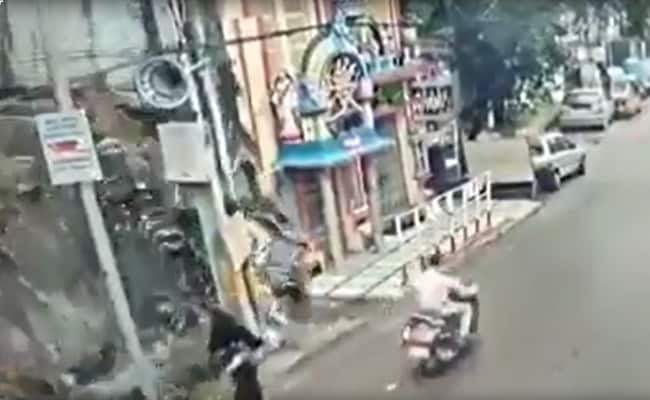 The woman was walking past as the building collapsed around her

A woman in Hyderabad’s Moghalpura suburb came within inches of being buried alive today, after a decrepit building nearly collapsed on top of her as she was walking past.

In chilling visuals of the incident – sourced from a CCTV feed in the area – the woman, dressed in a black burqa, can be seen walking down the side of a busy road.

As she crosses a temple and proceeds about halfway past the building next door – a two-storey structure that appears abandoned and the facade of which is propped up with wooden sticks and dried palm leaves – it begins to crumble and then suddenly collapses.

In the seconds before the camera’s view is obstructed by plumes of smoke and debris, the woman can be seen jumping away from the falling building.

As the smoke clears, huge piles of bricks, concrete slabs and wooden window frames can be seen lying on the road, as passing vehicles pull up to survey the damage. 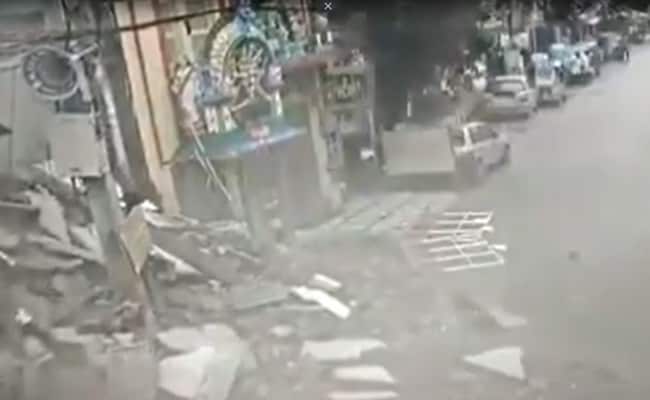 Hyderabad has seen heavy rainfall over the past few days. However, no rain has been recorded in the past 12 hours and the city is considered to be out of danger.

Earlier dramatic visuals of vehicles being swept away by strong currents in flooded areas of the city emerged. Many areas received over 20 cm of rainfall in the past 24 hours alone, news agency ANI reported quoting Telangana Chief Secretary Somesh Kumar.

Fifteen people, including a two-month-old, have died in rain-related incident in Hyderabad in last 24 hours. Nine people died after a compound wall collapsed and fell on 10 houses due to heavy rain late last night.

The rains were triggered by a deep depression over the west-central Bay of Bengal leading to heavy rains across several districts of Telangana, according to the weather department.

The depression over western parts of Telangana, the weather department has predicted, will move west northwestwards and gradually weaken into a well-marked, low-pressure area in the next 12 hours.

Telangana Announces Rs 10,000 For Every Flood-Hit House In Hyderabad

Cabinet Approves Bonus For Central Employees, Over 30 Lakh To Benefit

UP Farmers Forced To Sell Crops At Less Than MSP Even Now: Priyanka Gandhi Vadra

At Least 11 Afghan Women Killed In Stampede Near Pakistan Consulate