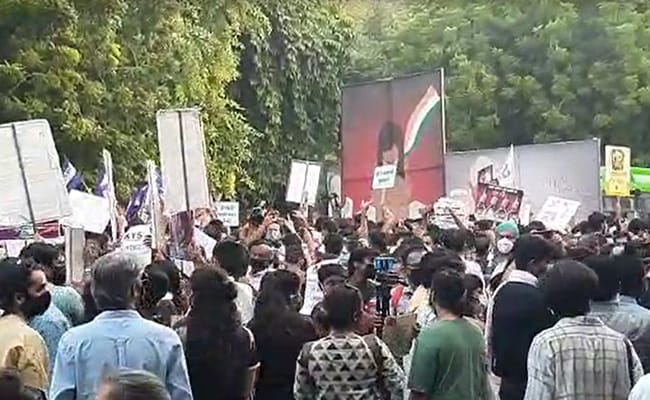 Arvind Kejriwal is expected to visit Jantar Mantar, where a protest is on over Hathras case

Delhi Chief Minister Arvind Kejriwal is likely to join hundreds of people at Jantar Mantar near India Gate this evening to demand action over the gang rape and murder of a 20-year-old woman in Uttar Pradesh’s Hathras.

Bhim Army chief Chandrashekhar Azad had also called a protest at India Gate. But after the Delhi Police imposed restrictions on crowds in the area, Mr Azad said the agitation had been shifted to Jantar Mantar, 3 km away.

Bhim Army protesters are expected to join hundreds of people in what will likely be a fiery protest at Jantar Mantar. The ruling Aam Aadmi Party (AAP) in Delhi tweeted in support of the protest that prompted the police to ban large crowds around India Gate.

The date of protests is significant – today is Gandhi Jayanti, or the anniversary of the birth of Mahatma Gandhi, who was among the first to fight for oppressed members of the so-called lower castes.

The 20-year-old woman, who died on Tuesday, suffered fractures, paralysis and a spinal injury after a savage assault by four men from the so-called upper castes. The police said there was a gash in her tongue because she had bitten it while being strangled.

“We will ensure justice for our sister. We won’t sit quietly till she does not get justice,” she said, addressing a crowd of Congress supporters and demonstrators.

“The government did not help at all. Her family is feeling helpless. We will put political pressure on the government. She wasn’t even given a cremation following Hindu customs,” Ms Vadra said.

The opposition party has been at the fore of demonstrations against the incident that has put Prime Minister Narendra Modi’s BJP, which rules at the centre and in UP, on the receiving end of growing public outrage.