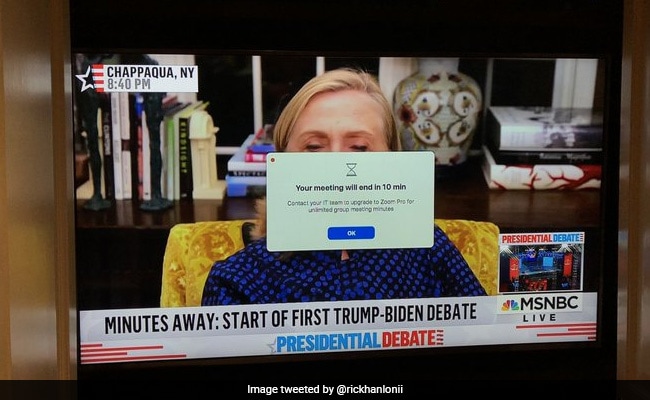 Hillary Clinton’s interview on MSNBC was interrupted by a Zoom notification.

Former US Secretary of State Hillary Clinton was in the middle of an MSNBC interview being conducted over Zoom when the video conferencing service chimed in to remind her that her meeting would end in 10 minutes.

“You meeting will end in 10 min. Contact your IT team to upgrade to Zoom Pro for unlimited meeting minutes,” Zoom told Ms Clinton through a pop-up notification. It seems like neither the TV channel nor the former presidential candidate had upgraded their Zoom accounts, preferring to use the free version where meetings can only go on for 40 minutes.

“Ok, ok, I’ll upgrade,” Hillary Clinton promised in a hilarious tweet on Wednesday, which has been ‘liked’ by nearly 50,000 people on the microblogging platform.

At a time when the coronavirus pandemic has forced millions of people across the world to work from home and attend work meetings remotely – mostly through platforms like Zoom – many found Ms Clinton’s predicament quite relatable.

“For some reason I was comforted to know she uses the free version of Zoom like the rest of us,” one Twitter user wrote.

While Hillary Clinton was doing a live remote interview on MSNBC, this pop-up came on the screen. For some reason I was comforted to know she uses the free version of Zoom like the rest of us. pic.twitter.com/xM8lI1rdQw

The picture of Zoom’s time notification popping up on TV was described by several people as the defining image of the year 2020.

MSNBC is using the free version of Zoom for their interview with Hillary Clinton lmao pic.twitter.com/yBLs17bHBR

Video conferencing platforms like Zoom saw a huge surge in popularity earlier this year as the pandemic forced people inside and meetings moved online.