Here’s Why Paneer Tikka Is Trending Amid US Election 2020 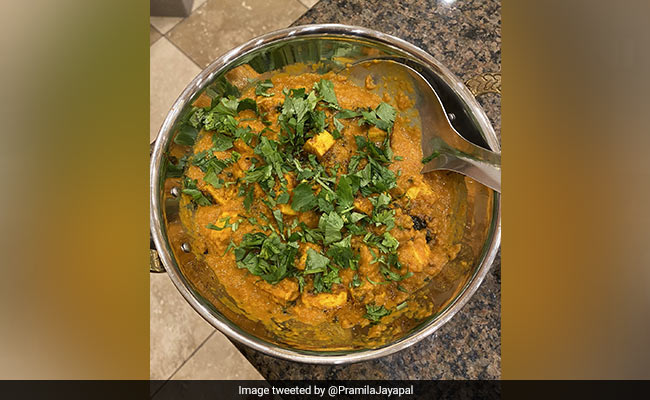 A picture shared on Twitter by Indian-American Congresswoman Pramila Jayapal.

On the eve of the 2020 United States presidential election, several social media users were surprised to see “paneer tikka” trending on Twitter. The classic Indian dish may not have much to do with the election, but it found a spot on the trends list thanks to a tweet by Indian-American Congresswoman Pramila Jayapal.

On the night before the election, Ms Jayapal decided to make some comfort food. The dish she chose was paneer tikka, in honour of Democratic Vice Presidential nominee Kamala Harris. Mr Harris had recently revealed that her favourite North Indian dish is “any kind of tikka”.

“Compulsive, night-before-election activity: make comfort food. That’s paneer tikka tonight, in honor of electing #KamalaHarris Veep tomorrow since she just said on Instagram that her favorite North Indian food is any kind of tikka!” wrote Pramila Jayapal, 55, on Twitter. She also added the hashtag #BidenHarris2020 while urging US citizens to vote.

The Congresswoman, a members of the Democratic Party, also shared the recipe in a follow-up tweet.

By popular demand, the recipe for Paneer Tikka Masala, slightly adapted from the fabulous @twosleevers! You can either eat the tikka on its own, or add the masala (sauce) which is like a curry. Enjoy! pic.twitter.com/0tNyEZOWN4

However, Ms Jayapal’s version of paneer tikka raised quite a few eyebrows on the microblogging platform. Several Twitter users pointed out that it looked nothing like a traditional paneer tikka, which is not served with gravy.

Guys, I figured out what happened.
Pramila ordered malai paneer from a restaurant and called it paneer tikka. She didn’t cook this. That is why she doesn’t know what the dish is. https://t.co/8A3Bdh5WHw

In what universe does qualify as paneer tikka @_SiddharthNayakhttps://t.co/FNW3UwYwaG

Like Kamala Harris, Ms Jayapal has her roots in Chennai too. She was born in Tamil Nadu capital and immigrated to the United States in 1982, at the age of 16.

Ms Harris’s mother, Shyamala Gopalan, was born in Chennai and immigrated to the US for a doctoral programme at the age of 19.