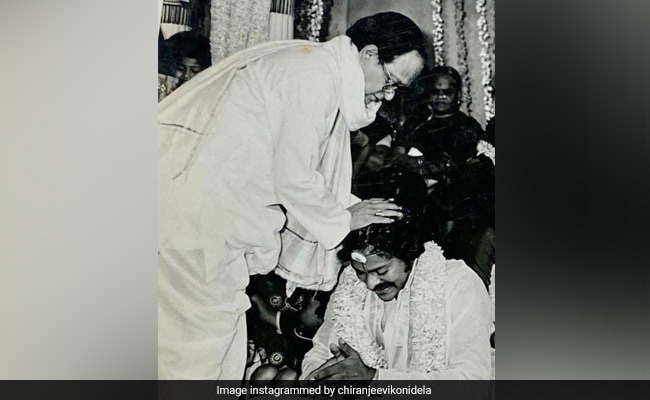 On father-in-law Allu Ramalingaiah’s 99th birth anniversary, south superstar Chiranjeevi posted a beautiful memory and a heartfelt note on social media. Allu Ramalingaiah was a renowned Telugu actor. Remembering his father-in-law, Chiranjeevi posted a picture from his wedding album and wrote: “Fondly remembering Shri. Allu Ramalingaiah garu on his 99th birth anniversary. More than just as my father-in-law, I have always admired his many facets, as a great actor, a passionate doctor, a committed freedom fighter, a profound philosopher, as a guiding mentor, as a guru, and a compassionate human being. You will always remain in our thoughts, Allu garu! And your centenary next year will certainly be a true landmark to deservingly celebrate your illustrious life.”

Chiranjeevi married Surekha, daughter of actor Allu Ramalingaiah, in 1980. The couple are parents to son Ram Charan, who is an actor, and two daughters – Sushmita and Sreeja. Chiranjeevi is also the uncle of actors Allu Arjun, Allu Sirish, Varun Tej, Niharika and Sai Dharam Tej.

In honour of Allu Ramalingaiah’s memory, his family, including Allu Aravind, Allu Venkatesh, Allu Arjun and Allu Sirish, announced to make a new film studio in Hyderabad – Allu Studios. “1st of October marks the 99th birth anniversary of our beloved Dr Sri Allu Ramalingaiah. To commemorate the occasion and honour his memory, the Allu family will inaugurate the construction work of Allu Studios. We celebrate the legacy of our grandfather and dedicate this Allu Studios to him. With all your blessings and good wishes, we commence the works of Allu Studios,” wrote Allu Arjun on Instagram.

Chiranjeevi was last seen in the 2019 film Sye Raa Narasimha Reddy, which also starred Amitabh Bachchan in a significant role. He will next be seen in Telugu film Acharya, directed by Koratala Siva.