Has Trump Made The US Polls A Nail Biter?

A fortnight ago almost every pollster had written off Donald Trump. Today, on Election Day, everyone is not that sanguine. Even “sleepy Joe” has been forced out of the comfort of his Delaware home into a last week of high-pitched campaigning in key states. If Joe Biden loses, the pollsters will be totally discredited; but Joe will be blamed for hoping that an electronic campaign was enough to see him through.

Joe Biden and his advisers kept him locked up fearing that the virus and rallies would risk him and those that attended. Trump had no such compunctions. Having contracted Covid and recovered, he campaigned as if on steroids, having large rallies to galvanize his base.

By last week it became clear that the race was tightening and Biden’s camp had to do something. His vice presidential pick Kamala Harris had failed to fire up the black electorate, with polls showing Biden 68% lead in the black votes compared to 85% that Hillary Clinton got. (IBD/TIPP). More pertinently, polls showed that the black turnout was lower than expected in key states like California. Similarly, Hispanic support had dropped, and in Florida, young Hispanics were leaning Republican.

Biden hit the road and also called his former boss, President Barack Obama, for help in getting back the blacks and rallying the Hispanics, a community he had polled well in. Together they chased Trump to counter his endless rallies. The focus for the Democrats was Florida and key frost states of Pennsylvania, Wisconsin, Michigan and Minnesota. The first three were traditional democrat states that Clinton lost and without which Biden’s road to the White House is difficult.

Joe Biden and his advisers kept him locked up fearing that the virus and rallies would risk him and those that attended.

So after almost 100 million Americans have already voted, where is this election on Election Day USA?

FiveThirtyEight’s founder editor Nate Silver, who has Biden on a 90:10 chance of winning, admits that Pennsylvania could change all that and “without (it) Biden becomes the underdog”. It is a state that hasn’t had a Biden bounce, like Michigan and Wisconsin, and has stayed at around 5%. And this 5% depends on the polls being right. As the New York Times graph below shows, corrected for 2016 errors, Pennsylvania is a very close run thing, and most of the Sun Belt states that are considered swing would turn red. 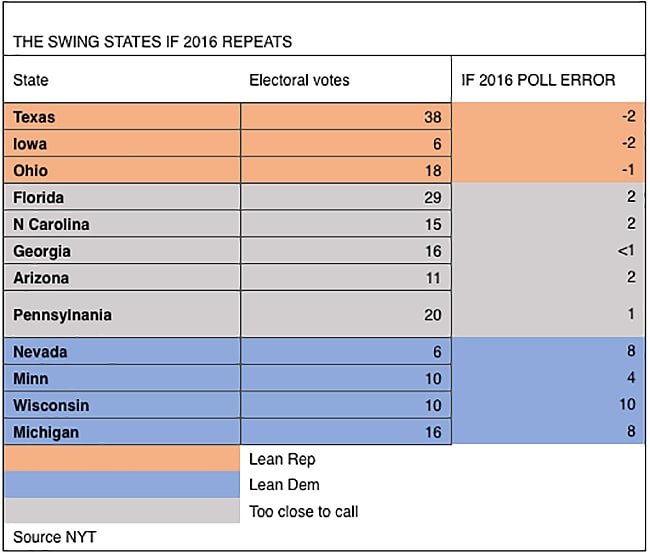 The bad news for Biden this week was a well-respected poll, Des Moines Register in Iowa, showing a huge jump in support of Trump, moving the state from toss up to Lean Republican. The same pollsters had in 2016 shown a late swing in Iowa which on Election Day showed up across the neighbouring Democrat states of Wisconsin and Michigan. According to the poll, 5% of the voters said that they hadn’t indicated their Trump preference until now, in other words they were the “shy Trump voters” that many claim won him 2016, and which he believes will turn out for him again.

The concept of shy voters has been mocked by traditional pollsters who say they have changed their polling to account for white non-college people so that there is no chance that they have missed them this time. Republican leaning pollster Trafalgar, which predicted 2016, and Florida in 2018, says these guys are wrong and the shy voter exists and they are Republican, which is why it claims a close but narrow win for Trump taking some of the states that he picked up in 2016, especially Pennsylvania. 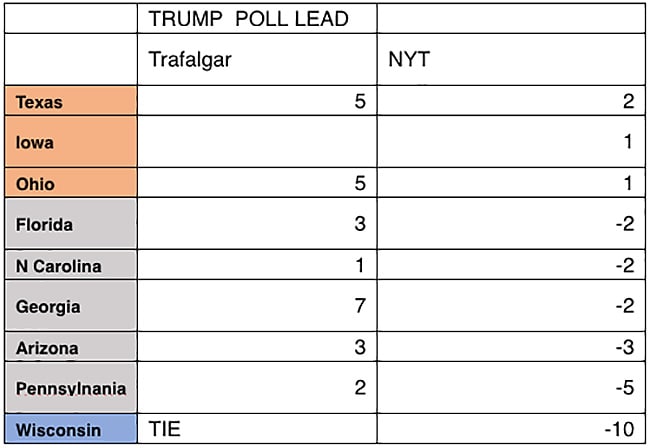 Trafalgar’s theory of ask the voter what the neighbor thinks lets the “shy voter” show their preference without showing it. The theory is supported by the well-respected USCDornsife polls which capture what they call “others voting and social contacts voting”. While its main projection shows Biden miles ahead with a 10-12% lead, the two are running neck-and-neck among “others” and as for social contacts, Biden’s lead is halved. 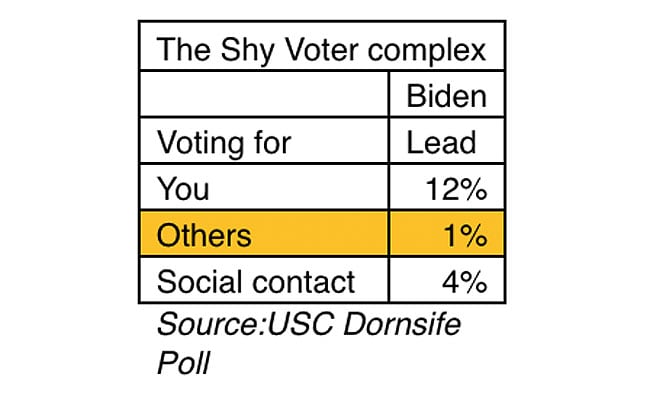 Given that this is a national poll where heavily favoured Democrat voting states make for a majority of those polled, the position in battleground states could be much worse.

IBD/TIPP now reports that for the first time Trump is marginally leading amongst independents. This is just one poll so it may be an outlier, but again, they called 2016 correctly.

So will Biden lose and Trump win?

The huge turnout across the board should have suggested a Biden sweep, but in Covid times it is hard to predict. The fact that Biden is flying around shows that the Democrats are not comfortable. If all the polls are correct, they sweep, but are the polls correct?

To quote the well-respected Nate Silver again, the election is a “fine line between a landslide and a nail biter”.

Finally, as US election results are going to stagger in from around dawn tomorrow, here are some bullet points to watch for in three battleground states:

In North Carolina, where Democrats hope to repeat Obama’s 2008 win, watch New Hanover County where Trump won by a narrow 2%. Also overall, Democrat registered voters have a 2,50,000 lead over Republicans in early voting and if they all voted for their parties and independents split evenly, it may be too big a lead for republicans to cut back on. 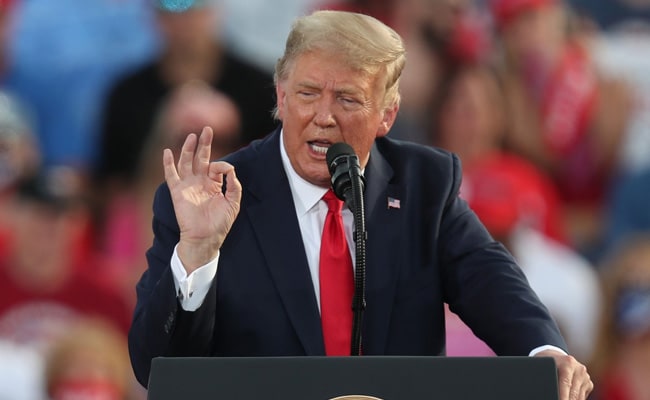 Donald Trump, having contracted Covid and recovered, campaigned as if on steroids, having large rallies to galvanize his base.

Florida should come in next, and here the space to watch is Miami Dade, a huge Democrat County where Republican turnout in early voting is up 26% while Democrats are only up 11%. Democrats won this by almost 3,00,000 votes in 2016; any drop below that would make it difficult for them to win back the state.

Arizona is the third state to watch. Democrats had a lead but it has narrowed a lot. Everything depends on Maricopa County, which has Phoenix, accounting for 60% of the state’s votes. While in 2016 it voted Trump, in 2018 it elected a Democrat Senator.

Unfortunately, many states, especially Pennsylvania, will take a lot of time to count, and the worry is that slow counting could trigger violence. If states where early counting showed Trump ahead change to Biden, there could be considerable unrest. Reports from the US say the police are out in force and many shops are boarding up for fear of violence.  Let’s hope for decisive victory that would hopefully put a cap on this.