Google Features Web Stories Carousel on Discover Starting in India, Brazil and US

Google is announcing a dedicated Web Story carousel within its Discover feed, which is launching in the US, Brazil, and India to start with, and coming to more countries in the future. News publishers will be able to create their own stories using the free feature from Google, and will be able to monetise these posts as well. Web Stories look like the “stories” format you see on most apps today, but instead of being limited to a single app, can be found on the Web through your browser.

News publishers can get started with Web Stories by visiting stories.google, which includes the Web Stories Editor. Google had launched Web Stories (then known as AMP Stories) in 2018, bringing content similar to Instagram or Snapchat stories but on the open Web instead of being restricted to a particular app. Content for the stories format in the US had initially come from partners like CNN, The Washington Post, Conde Nast, and Wired.

At the time, Google had explained the need for the format by saying: “On mobile devices, users browse lots of articles, but engage with few in-depth. Images, videos, and graphics help get readers’ attention as quickly as possible and keep them engaged through immersive and easily consumable visual information.”

Since then, Google has expanded its Web Stories program internationally, and NDTV is one of the publishers that helped launch the Web Stories ecosystem, creating a number of posts in this new format. 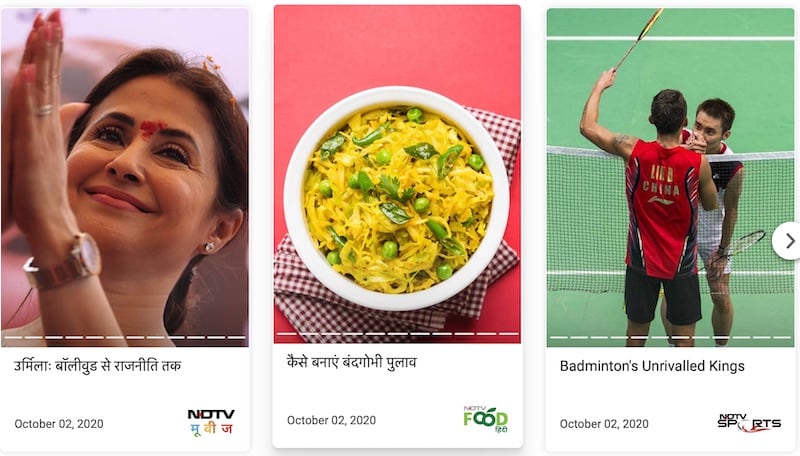 If you’re not familiar with stories across different apps, this is what the experience is like — the stories are divided into ‘cards’ and you simply tap on the right side to move forward, or the left to go back. It’s not just a slide show as you can use full-screen videos, add text and animations, and even more information that can be accessed with a tap. In our experience, stories are good for explaining things in lists, such as this guide to scheduling WhatsApp messages, or showing visual changes, like this article on the Evolution of Pokemon.

This format is unlike other apps’ stories because it’s available on the Web, but in terms of how it looks and how we make use of these pages, it’s pretty similar. Google recommends vertical video and captions instead of speech, with short text within 30 words on a single page, suggesting that it’s meant to be used on phones and on the go.

Web Stories are a full-screen experience that focuses on visual narratives, with animations and tappable interactions. As a part of the open Web, they’re available for anyone to use and can be shared and embedded across the Web, rather than requiring a specific app to see.

And since they’re a part of the open Web, they can also be tracked and measured using the same tools that a publisher uses for other pages, Google noted on its developer site.