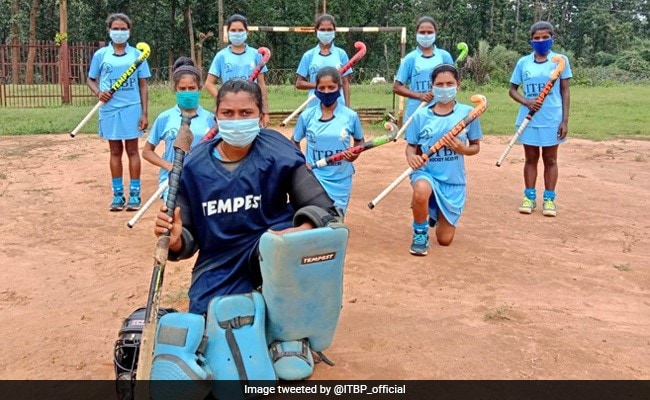 9 girls from a Maoist affected area have been selected for the junior national hockey trial camp.

Nine girls from a Maoist affected area of Chhattisgarh, who trained on a helipad in the absence of a proper field, have been selected for the junior national hockey trial camp.

Beginning their battle against the odds about four years ago, the girls in the age group of 14-17 years have been trained by paramilitary force Indo-Tibetan Border Police (ITBP) that is deployed in the Kondagaon district of the state for anti-Maoist operations. “Nine tribal girls who began their hockey training with the ITBP academy run by the 41st battalion have been selected for the Hockey India sub-junior and junior national trial camp,” a senior ITBP officer told PTI.

“These girls were encouraged to take up the game in 2016 by the force. They study at the kanya ashram (girls school) in Mardapal area of the district,” the official said.

Training to excel under Head Constable Surya Smit of 41st Battalion ITBP, Kondagaon. The girls have won may hockey competitions in past few years. First such team prepared in Bastar.@KirenRijiju#Himveers#womenempowermentpic.twitter.com/7jaYnrOz0z

The camp will be held later this month and the girls have been issued permanent ID cards by Hockey India recently, he added.

Their coach and ITBP head constable Surya Smit said the girls “can do wonders if given more exposure and better facilities”.

“We have provided them the basic hockey playing gear, equipment and uniform. They have built their capabilities slowly but steadily,” he said.

The girls, however, rued the lack of facilities to pursue their dream of playing in the national women’s hockey team and appealed to Union sports minister Kiren Rijiju to help them get access to a proper playing field.

“We had read in our school book that hockey is our national game but knew nothing about it till 2016 when ITBP took us under its wings. We practise on a helipad near the Mardapal police camp which is the only open space available,” Sulochana Netam, one of the players, said.

“The helipad is partly cemented and the rest of the ground is uneven. There is a fear of getting injured and playing on such a ground is difficult too. We request Union sports minister Mr Kiren Rijiju to help us in getting a proper playing field,” she said.

Netam, who plays in the centre forward position, says they take out time from their study schedule to ensure they never miss hockey practice.

Sevanti Poyam, the team’s goal keeper, said they have played in state-level tournaments but aspire to display their skills in the national league and make their “country, state and family proud.”

At least 55 girls from the local area that includes tribal regions are being trained by the ITBP in hockey apart from some others in football, the officer said.

The ITBP, that functions under the Union home ministry, is primarily tasked to guard the 3,488 kms Line of Actual Control (LAC) with China apart from undertaking anti-Maoist operations.