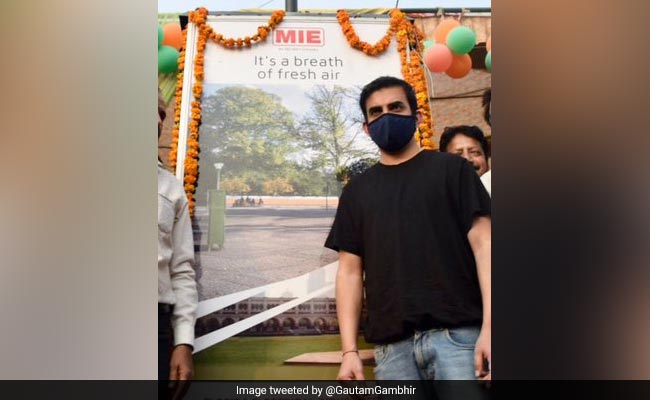 The 12-feet-tall air purifier will cover an area of 1,000 square metres and deliver 2 lakh cubic metre of clean air every day, according to a statement from his office.

The Gautam Gambhir Foundation has funded the purifier. Delhi BJP president Aadesh Gupta was also present at the inauguration event.

In January, Mr Gambhir had inaugurated a first-of-its-kind smog tower in Lajpat Nagar’s Central Market as a pilot project.

Following positive response from people in that area, Gambhir decided to install more air purifiers in markets across East Delhi, the statement said.

In terms of technology, the new purifiers are more advanced and have additional features like high mast lights, it said.

“I don’t believe that getting yourself advertised on every traffic signal is the solution to such a major problem which affects each and every Delhiite especially our elders,” he said.

The East Delhi MP also questioned the banning of firecrackers only a few days before major festivals.

“Why don’t they ban crackers throughout the year when they know the air quality of the city is so bad. Why ban them only before festivals,” he said.

“They first gave licenses to traders for traditional and green crackers and then banned them as an ad hoc measure. This led to tremendous losses to the shopkeepers and traders in time of the pandemic. They should have made their policy clear from the very beginning,” Mr Gambhir said.

On November 5, the Delhi government banned the sale and use of all types of firecrackers in the city from November 7 to November 30.

On Monday, the National Green Tribunal also imposed a total ban on sale or use of all kinds of firecrackers in the NCR from November 9 midnight to November 30 midnight, saying “celebration by crackers is for happiness and not to celebrate deaths and diseases”.

Delhi Environment Minister Gopal Rai on Wednesday appealed to opposition to desist from making statements that provoke people against the ban on firecrackers.