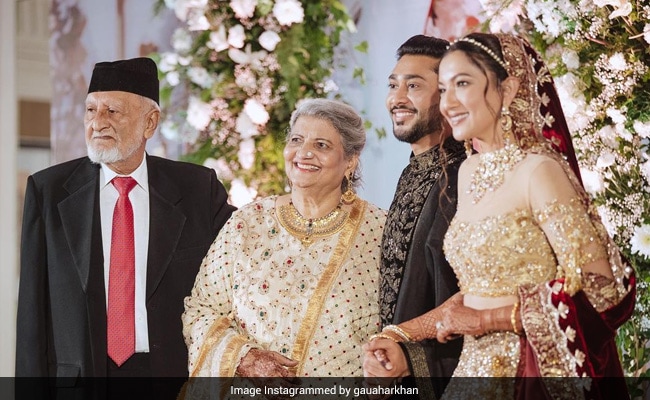 TV star Gauahar Khan, who lost her father Zafar Ahmed Khan to prolonged illness on Friday, shared an emotional post on Instagram, a day after his death. The post happens to be a snippet from Gauahar and Zaid Darbar’s wedding festivities, in which her father can be seen praying for the actress. She described it as the “most favourite memory of my life.” Sharing the video on Instagram, the Tandav actress wrote: “My father, my pride ! Zafar Ahmed Khan you are the real star. My Papa praying for me at my Nikah (my most favourite memory of my life). #Alhamdulillah.”

On Friday, Gauahar announced the death of her father on social media in an emotional post. She wrote: “My hero. No man like you, ever ! My father has passed to the ever after as an angel . Alhamdulillah. His passing away was a testament to his beautiful life and the best soul he was. Forever my papa. I love you oh so much. I am so much of you Papa and yet can never ever be even a percent of your magnanimous personality. #MyForeverShiningStar. Keep him in your prayers please.”

Gauahar Khan, a former model, famously featured on the show The Khan Sisters, which showcased the lives of her and her sister Nigaar. Gauahar Khan has also featured in films such as Rocket Singh, Game and Ishaqzaade. She participated in reality TV shows such as Jhalak Dikhhla Jaa 3, Bigg Boss 7 and Fear Factor: Khatron Ke Khiladi 5. Last year, she featured as one of the ‘seniors’ in Bigg Boss 14. She was last seen in Amazon prime Video’s political drama Tandav, starring Saif Ali Khan in the lead role.